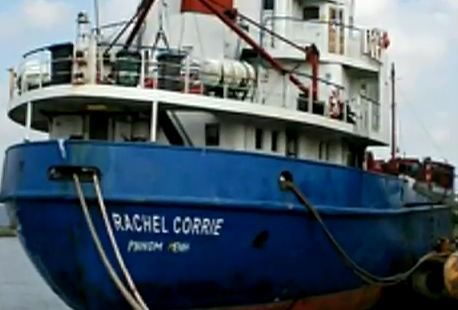 The Rachel Corrie solidarity ship sailed from Ireland heading towards the Gaza Strip after 48-hour delay due to logistic issues. Palestinian Legislator, Jamal El-Khodary, head of the Popular Committee Against the Siege, stated that the ship is part of the international solidarity against the illegal
Israeli siege imposed on the Gaza Strip.

El Khodary added that the ship contains several figures and activists in addition to 1200 Tons of aid materials such as cement, paper, medical equipment, school supplies and several other materials.

The ship is one of eight solidarity ships carrying peace activists from nearly 40 countries.

The new wave of solidarity ships are organized by the international coalition that includes the Free Gaza Movement, the Turkish Humanitarian Aid Foundation, the European Committee Against the Siege and several Malaysian, Greek and Irish institutions.

The Free Gaza Movement reported that the 1200-ton cargo ship, one of eight solidarity ships, will be joined by ships from Turkey and Greece.

Israel said it will not allow solidarity ships to reach the Gaza coast while media reports indicated that the Israeli Navy was ordered to prevent the humanitarian ships from reaching Gaza, even if this means using military force against the nonviolent ships and activists.

The movement stated that Israel threats and intimidation will not stop the ships and added that “The Freedom Flotilla is acting in line with universal principals of human rights and justice in defying a blockade identified as illegal by the UN and other humanitarian organization”.