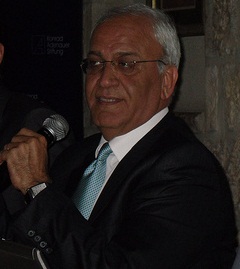 Saeb Erekat, who has been chief Palestinian negotiator with the Israeli government since the Oslo Accords of 1993, told an audience in Tel Aviv Sunday that the Palestinian people’s patience is running thin, due to ongoing Israeli obstruction of peace talks.In his talk at the Israeli Institute for National Security Studies, Erekat said about the current Israeli administration, ‘You tie up my hands and feet and throw me into the sea. Then you tell me I don’t know how to swim. That’s how the Israeli government behaves today.’

While the former Israeli Prime Minister Ehud Olmert spoke out Sunday against so-called ‘proximity talks’, a type of negotiation suggested by US officials that would address only peripheral, and not core issues, Erekat suggested that he, as Palestinian negotiator, was willing to trust Barack Obama and his associates in their attempt to re-launch peace talks.

Erekat acknowledged to the Israeli audience that many Palestinians had lost faith not only in the peace process, but in him as their chief negotiator, given how much Palestinians have lost with Erekat as their negotiator. Israeli settlement expansion in the West Bank has escalated exponentially since the 1993 Oslo Accords were signed, supposedly signaling the beginning of peace in the region. Since these settlements are all constructed on Palestinian land, many people see their negotiator, Saeb Erekat, as a traitor.

Regardless of this past, Erekat said that he has the strength to push forward and represent the Palestinian people in any negotiations. He said to the Israeli establishment, ‘I negotiate with you because in my opinion, most Jews and Arabs want an agreement, and the alternative, the conflict, is too hard,’