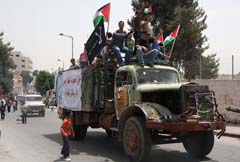 In a massive protest march, Saturday, in the West Bank city of Ramallah, thousands of Palestinians marched through the city streets in remembrance of the 62nd anniversary of the Palestinian Nakba, or ‘Catastrophe’, when the state of Israel was created on Palestinian land in 1948 and hundreds of thousands of Palestinians were expelled from their homes in, what is now, Israel.Chanting ‘We will not give up on the right of return, we will return to Jaffa, Haifa, Akko and Ramla,” the protesters referred to the names of their towns and villages inside what is now Israel.

Palestinians in the West Bank and Gaza are not allowed to live, or even to visit, their old homes in Israel. As part of the protest march, some of the Palestinian refugees from inside what is now Israel drove antique trucks that accompanied them on their exodus to the West Bank in 1948.

The commemorative march began at the grave of Yasser Arafat, the longtime leader of the Palestine Liberation Organization who died in 2004. The marchers carried signs confirming the Palestinian refugees’ internationally-recognized right to return to their homes, and condemning the Nakba.

The Ramallah protest was one of hundreds of events commemorating the Nakba that took place in different parts of Palestine and around the world, including protests, marches, film showings, educational events and an all-day collaborative radio broadcast organized by CKUT radio in Canada.