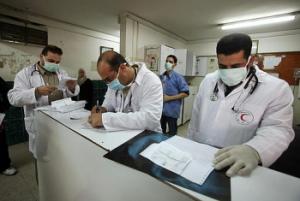 Despite Israeli guarantees to the International Community, the Israeli Authorities are still obstructing the entry of medicine and medical equipment to the besieged Gaza Strip. The last time medicine was allowed into Gaza was mid October 2009.Raed Fattouh, who heads a committee in charge of the entry of good into the Gaza Strip, stated that since mid October 2009 until this day, Israel has been obstructing the entry of all medical equipment and medications transferred from the West Bank to Gaza.

Fattouh held Israel responsible for the lives of the patients in the Gaza Strip as the siege has already led to the death of hundreds of patients, including children and infants.

Israel claims that the equipment and the medicines are undergoing “security check” as they “can be used in a counterproductive way.”

Fattouh said that the Palestinian Authority asked the World Health Organization and other international groups to intervene and pressure Israel into allowing the needed medical equipment.