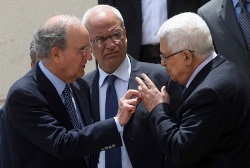 The Wall Street Journal reported, Friday, that Palestinian President, Mahmoud Abbas, offered Israel concessions regarding the borders of the anticipated Palestinian State. The report stated that Abbas and his negotiations team holding proximity talks mediated by the United States, offered more concession that the ones Abbas offered the former Israeli Prime Minister, Ehud Olmert, during direct talks between the two leaders in 2008.

Abbas offered Olmert to exchange 1.9% of lands in the occupied West Bank with equal amount of lands that are considered part of Israel. But Olmert rejected the offer and presented different and higher demands.

But now, Abbas made his new offer that was described as “an unexpected offer”, and the Wall Street Journal said that Abbas made such an offer as he believes that Israeli Prime Minister, Benjamin Netanyahu, is not serious about a final status peace agreement.

Erekat added that the success of George Mitchell’s efforts means the freedom of the Palestinian people.

Mitchell concluded a visit to the region this week and met with Netanyahu and Abbas but no deals were presented and no progress was made except that Israel said it would make “good will gestures” which usually mean removing some roadblocks installed by the army in the West Bank.