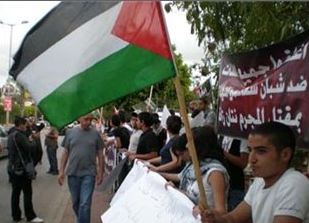 Dozens of Arab residents of the northern Israeli city of Shefa-‘Amr met Sunday to protest Israeli President Shimon Peres’ participation in the city’s 100th anniversary celebration.The protesters carried posters decrying Peres’ visit, saying that the President’s presence does not honor their city and that its residents do not want him to participate it its 100th anniversary celebration.

The protest was organized by the Abna’ al-Balad (Sons of the Country) Movement and the National Democratic Assembly, as well as several other political groups.

During his visit, Peres, met with city officials and gave a speech about “mutual respect and good relations between residents of different faiths and opinions in the city.”

He also mentioned the slayings carried out by Eden Natan-Zada. Natan-Zada, a Jewish Israeli, boarded a bus in Shefa-‘Amr in August 2005 and opened fire upon the passengers, all of whom were Arab Israelis, killing four, including two young girls.

The shooting spree ended when Shefa-‘Amr residents attacked and killed Natan-Zada. The Israeli government is currently prosecuting the residents involved in his killing.

Among the demands of the Shefa-‘Amr protesters was that Israel close the cases against the residents believed to be involved in Natan-Zada’s killing.

Peres had previously promised to close the files of the residents implicated in Natan-Zada’s killing, but after five years their files have not been closed and no charges no charges dropped.

In a speech during the protest, Khalid Shaker, a member of the political bureau of the National Democratic Assembly, said that protest is a means of struggle to end Israel’s repression of Arab political leaders and ongoing political arrests.

Another National Democratic Assembly member, Khalid Khalil, said in his speech that the 100th anniversary celebration belongs to the residents, and that Peres should not be part of it.

In the his speech, Peres said that the bus attack was tragic and that similar attacks must be avoided. He also saluted the municipality for its services and development projects, especially in the field of education.

Peres also spoke on a regional level, addressing the Lebanese people the the message that Israel wants to live in peace with Lebanon.

The President added that he hopes to see the current proximity talks between Israel and the Palestinians progress into direct negotiations.