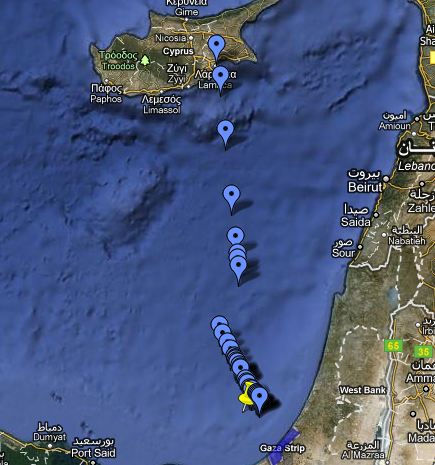 The Greek-Swedish solidarity ship, carrying humanitarian supplies to the Gaza Strip, sailed earlier on Tuesday morning after several hours delay due to technical difficulties, while the rest of the ships will sail to meet in Cyprus before heading to Gaza. The delay was due to routine checks and to finalize loading humanitarian aid. Four more ships will sail on Tuesday at noon from Athens and Crete Island in Greece, and will be heading to Rhodes Island south east of Greece before heading to Cyprus to meet up with three ships sailing from Antalya in Turkey.

The Free Gaza Movement said that due to the delay in the sailing of the cargo ship, the ships will sail together on Thursday and are expected to reach the Gaza coast, if not obstructed by Israel, on Saturday morning.

Three ships sailing from Turkey, Kuwait and Antalya were delayed until Wednesday and will be joining the ships coming from Greece and the Rachel Corrie ship.

The activists and supporters said that they are determined to reach Gaza despite Israel’s threats, and that they are willing to remain in the ship as long as it takes until they reach the Gaza coast to deliver the humanitarian supplies.

The flotilla includes nine ships; one financed by Kuwait and carries the flags of Kuwait and Turkey, ship financed by Algeria, ship financed by Sweden and Greece, and six ships will carry the human rights activists. One of the ships carried the number 8000 referring to the approximate number of Palestinian detainees imprisoned by Israel.

750 activists from more than 60 countries are sailing to Gaza, among them 44 official figures and parliamentarians from Europe and several Arab countries, including ten Algerian legislators.

The ships also carry more than 10.000 Tons of medical supplies, wood, and construction materials, in addition to 100 mobile homes, and 500 power-chairs for the disabled.