Fighters Detonate An Explosive Charge Near The Electronic Fence In Gaza 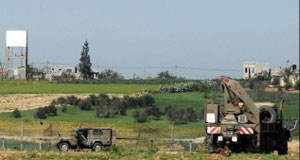 Palestinian fighters detonated an explosive device near an Israeli military vehicle, Tuesday morning, near the Erez terminal in northern Gaza. The Jihad Jibril Brigade, the armed wing of the Popular Front for the Liberation of Palestine has claimed responsibility for the attack.

The Brigade issued a press release stating that the explosion targeted a military jeep in northern Gaza, meters away from the electric border fence.

The Israeli army reported no injuries and said that soldiers haved combed the area without finding more explosives.

The soldiers opened fire at the Palestinian fighters, who managed to return to Gaza.

Eyewitnesses reported that the explosion took place after the army declared the area as a closed military zone and prevented Palestinian workers from entering it.

Two days ago, Israeli troops opened fire at a Palestinian worker near the electronic fence, seriously injuring him.