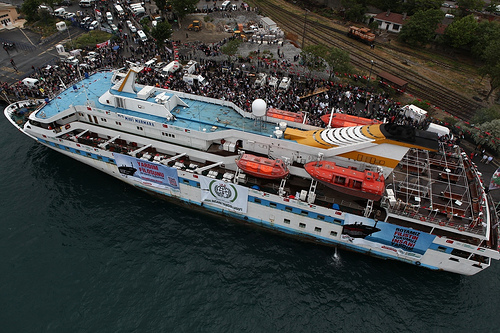 Hamas spokesman Dr. Sami Abu Zuhri stated that he is sure the Freedom Flotilla, a convoy of ships carrying humanitarian support and international and Arab activists to the Gaza Strip, will reach its destination, adding that Israel’s threats against the Flotilla are clear instances of “State Terrorism.”Abu Zuhri said that such threats are part of the illegal Israeli siege on the coastal region, and that the Palestinians are confident the Israeli threat will not stop the Flotilla.

The Hamas spokesman added that Israel’s measures against all efforts to break its Gaza siege constitute “terrorism” and part of Israel’s attempts to prevent its crimes from being exposed to the International Community.

“The ships carry a humanitarian mission, they want to break this illegal siege and deliver humanitarian supplies,” Abu Zuhri said, “The Zionist entity will be held responsible for the lives of the Arab and International activists, and the political and official figures.”

He also saluted the Mauritanian, Algerian and Kuwaiti ship that joined the Freedom Flotilla and added that the Palestinian people welcome all countries and activists who seek justice and oppose oppression.

Abu Zuhri said that the Palestinians were hoping the aid convoy will enter Gaza through Egypt via the Rafah terminal in order to avoid the threat of Israeli attack.