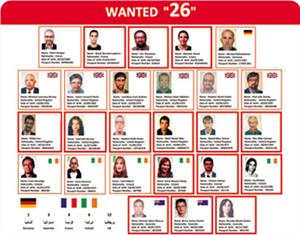 An Israeli diplomat in Australia who is believed to have been involved in forgery of passports used in the Israeli assassination of Hamas leader Mahmoud al-Madbouh in Dubai earlier this year is being expelled from the country.The Israeli Mossad has an intelligence officer operating at Israel’s embassy Canberra, reported The Australian.

Australia has decided to follow London’s example by expelling a Mossad agent rather than an Israeli foreign ministry official.

On Sunday, Australian Foreign Minister Stephen Smith demanded the removal of an Israeli diplomat and said that there is no doubt that Israel was involved in the forgery of the Australian passports used by some of the assassins of al-Madbouh.

However, Israel denies that Mossad agents are responsible for counterfeiting passports and assassinating the Hamas leader in Dubai.

Israel said that the removal of the Israeli diplomat from Australia is an “unfortunate issue that contradicts the strong and vital relation between the two countries”.

The Australian Foreign Ministry stated Monday that the decision will take effect in one week, and that all investigations conducted by the government have revealed without a doubt that Israel was involved in forging passports used by the Dubai assassins.

Two months ago, Britain expelled an Israeli diplomat, the representative of the Mossad in London, for his involvement in forging British passports used by some of the assassins.

The Australian reported that there are six Foreign Ministry officials working at the Israeli Embassy in Canberra, a commercial attaché, and one Mossad agent that Israel should declare to the country.

It is worth mentioning that besides Mossad agents operating in Australia, agents from Syria, Lebanon and Iran are also present in Lakemba, in western Sydney, the Australian said.