Salah: “We Don’t Need Israel’s Permission To Break The Siege” 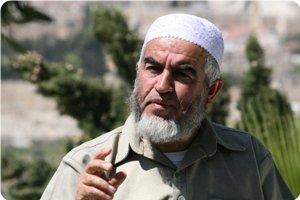 Sheikh Raed Salah, head of the Northern Branch of the Islamic Movement in Israel, stated that solidarity ships heading to Gaza, all acts of solidarity with the Palestinians people and breaking the illegal siege, do not need Israel’s approval. He stated that the Freedom Flotilla is heading to Gaza, and is determined to reach its coast to deliver humanitarian supplies regardless of Israel’s threats.

In a statement published by Al Quds Al Arabi newspaper, Sheikh Salah said that all ships will be sailing together from Cyprus to Gaza, and that the participants are determined to reach Gaza.

“They carry a message against this illegal siege, against the illegal occupation and oppression”, Sheikh Salah said, “This is an international demand expressed by delegates from more than 50 states, it is a popular Arab, American, European, African and Islamic demand”.

Sheikh Salah also stated that the demand of the Freedom Flotilla to reach Gaza through its territorial waters, is a legitimate demand that does not require Israel’s approval, and added that attacking the ships and the activists is an act of piracy.