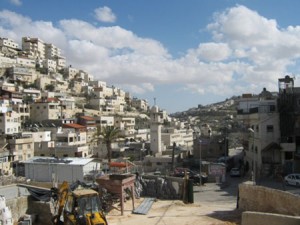 Four Palestinian residents were wounded by settler fire, on Saturday at night, in Silwan neighborhood, in East Jerusalem. Medical sources described their injuries as mild-to-moderate. Jawad Siyam of the Wadi Hilwa Information Center, stated that settlers guarding the Yonatan Building opened fire at a group of residents in Silwan.

Medics arrived at the scene and provided first aid to the wounded residents before moving them to the Al Makassed Hospital in East Jerusalem.

The clashes took place after dozens of residents gathered near the “Yonatan” building demanding the settlers to leave it especially after the settlers repeatedly opened fire at the residents and carried repeated attacks against them.

The Israeli police arrived at the scene and sided with the settlers, local sources reported.

Tension is still mounting in the neighborhood especially since 11 residents and five Israeli soldiers were wounded in earlier clashes.