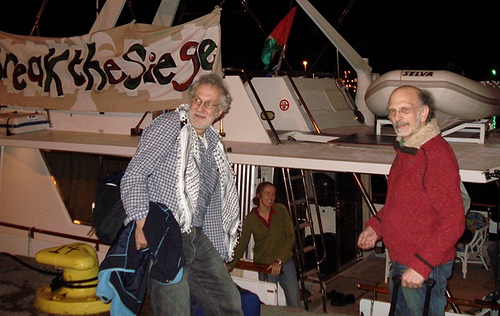 On Sunday morning the Flotilla of humanitarian aid bound for the Gaza Strip finally set off for Gaza, after several delays from the government of Cyprus and technical issues with some of the boats. The flotilla includes thousands of tons of humanitarian aid, and 800 peace activists from a variety of countries including Parliament members and other dignitaries. They plan to arrive in Gaza on Monday, although the Israeli government has warned that its Navy is prepared to forcibly board the ships and seize the humanitarian aid.updated from:
Report from the Gaza Flotilla: 8 ships on their way, determined to make it into Gaza

On Saturday morning, eight ships headed out into the Mediterranean Sea, determined to make it into Gaza with thousands of tons of desperately needed humanitarian aid. The following is a report from one of the crew members on the flotilla, just before leaving port in Cyprus.

At 17.30 Friday evening, the European Committee to Break the Siege on Gaza arrived at the staging point south of Cyprus, joining the Greek cargo ship and the three Turkish vessels in international waters. We are now waiting the arrival of five European parliamentarians from Cyprus, who have had to travel from the Greek south to the Turkish north in order to board a vessel to join us. It is an embarrassing episode for the Greek Cypriot government of President Christofias. Cyprus had previously been accommodating of efforts to break the siege on Gaza, but not this time.

The level of support for the international flotilla is growing by the day. There are now expressions of either support for allowing the ships in or calling for Israel to be restrained in its actions from Norway, Sweden, Brazil, Mexico, Chile, Italy, Russia and from the EU foreign affairs chief Cathy Ashton. At the same time, Israel has remained bellicose and truculent in its responses.

The atmosphere on board the lead passenger vessel, the Mavri Marmara, is calm and determined – thanks in large part to the drive and discipline of the Turkish delegation led by the indomitable IHH.

The Viva Palestina delegation, drawing on our experience of the three land convoys, is contributing to maintaining the resolve, which is hardening, despite the loss of two European vessels which have had to break off from joining the flotilla due to mechanical problems.

It is clear to us that Israel has already lost in this confrontation, which is entirely of its own making. First, the flotilla is generating unprecedented publicity, and it is overwhelmingly critical of Israel’s stance. I was interviewed on Fox News, for example, and even the interviewer seemed to run through the moderately hostile questions as a matter of course rather than with any conviction. Second, it has openly declared that it is prepared to use physical force against a peaceful, humanitarian mission. Despite efforts by hostile media to claim that this is merely a propaganda or political mission, the message that this flotilla is bringing vital humanitarian aid is getting through. The political dimension is a result purely of the illegal and immoral siege imposed on the people of Gaza. It is Israel and governments which support the embargo which have made concrete, glass, educational supplies and medicines and incendiary political issue.

As with every confrontation Israel has engaged in over the last few years it is drawing down its already reduced political stock. So, the threats to seize the ships and intern 600 people in the Israeli port of Ashdod are having the effect neither of intimidating people onboard nor of generating awe elsewhere. Perhaps among some people they may create fear. But creating fear is never the way to being loved. In fact, the bellicosity coming from Israel is more likely to lead some of those who continue to support it to fall out of love with it.

We await the shuttle boat from Cyprus and setting course for Gaza tomorrow.