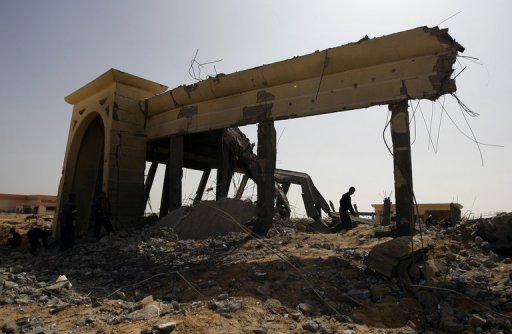 The Israeli airforce announced Sunday that its warplanes had dropped two missiles on the previously-destroyed Palestinian airport in Rafah, in the southern Gaza Strip, in the early hours of Sunday morning. Israeli government officials said that the airstrikes were in response to Palestinian militant groups firing two homemade shells from the Gaza Strip toward Israel. No casualties were reported.
The Palestinian airport in Rafah was destroyed by Israeli missile fire several years ago, and the Palestinian Authority has no control over its own airspace any longer, as Israeli forces have taken full control over all Palestinian airspace.

Israeli officials gave no indication as to why the airport was targeted in the Sunday morning strikes, although these airstrikes follow similar Israeli attacks on the previous two mornings. The alleged Palestinian resistance shelling came from the northern part of the Gaza Strip, according to Israeli officials, while the Israeli airstrike targeted the southernmost point of the Gaza Strip.

Palestinian resistance groups did not admit to firing any shells into Israel Saturday night, and Israeli officials said that of the two homemade shells that were fired, one landed inside the Gaza Strip and one landed just over the border in the Israeli desert.

The Israeli missiles caused significant damage, but no injuries aside from shock experienced by Palestinians in the area around the former airport.