Flotilla Activist’s Family on Hunger Strike to Demand his Release 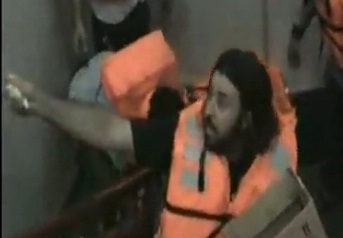 The family of Osama Qashoo, a British citizen of Palestinian descent, has declared a hunger strike that will only end with Qashoo’s release. Qashoo was one of the activists aboard this Freedom Flotilla attempting to bring aid supplies to Gaza. His mother, father, and six brothers are demanding his release after he and all of the other activists aboard the Flotilla were arrested by Israeli troops. Qashoo was a passenger aboard the Turkish ship Mavi Marmara that was that was illegally attacked by Israeli commandos, Monday.

It has been frontpage news in most international news organisations that as many as 19 people have died in this attack and there are large numbers of injured as well.

Osama Qashoo is a British citizen and a resident of Haringey in North London, a post-graduate from the National Film and Television School, and a member of the Free Gaza movement. He is a Palestinian activist and an award-winning documentary filmmaker.

Last news of him was heard on the evening before the attack, through press contacts at CNN. One brother in Saudi Arabia, another in New York and the rest of the family in the West Bank are beside themselves with grief and uncertainty. They do not know if he is one of the killed or injured, nor the conditions and length of his detention. Media contact has been cut, and family members have been unable to find out any information, even the names of those killed, since the attack occurred on the 31st.

“I know I am not alone in my distress and fear for my brothers life, and share this with the 749 other families and friends of those killed, injured and being held captive. My family is on hunger strike until Osama is delivered to us, safe and sound.” said Osama’s brother Mosab who is currently in New York.

“If anyone has any idea of his whereabouts, and whether he is safe, we beg of them to let us know.”