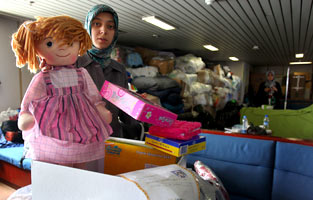 A number of countries have issued strong condemnations of the Israeli raid on the Freedom Flotilla, and Turkey withdrew its ambassador to Israel. The violent raid left 19 activists dead and dozens more wounded. Many of the casualties were Turkish.
Greece, Sweden, France, Austria, Spain, China and Russia all issued statements condemning the Israeli attack. The nations have also summoned their Israeli ambassadors to for an explanation of Israel’s actions.The US government’s response was more guarded. The White House spokesman said “We deeply regret the loss of life,” incidentally using the same words as Israeli Chief of Staff Gabi Ashkenazi during his statement about the raid. The parallel statements have fostered some speculation that Israel coached the US’s public response to the attack.

The British government reiterated its previous statements that the Gaza aid flotilla should not have tried to enter Gaza without Israeli permission, but said that Israel was out of line in attacking the ship with violence in international waters.

A number of international dignitaries and parliament members from various countries have pointed out that The Israeli attack and abduction of 700 civilians from around the world  has violated the following article of the UN Convention on the Law of the Sea:
Article 87(a) provides for ‘freedom of navigation.’

Article 88: ‘The high seas shall be reserved for peaceful purposes.’

Article 89: ‘No state may validly purport to subject any part of the high seas to its sovereignty.’

Article 90: ‘Every State, whether coastal or land-locked, has the right to sail ships flying its flag on the high seas.’

The Israeli government made a statement on the attack, but the statement included claims that were proven to be false by video footage, including a false claim that the aid workers attacked the invading soldiers – Israel’s own video footage that they claimed showed weapons showed only marbles which were part of the aid shipment meant for the children of Gaza.