All posts by If Americans Knew 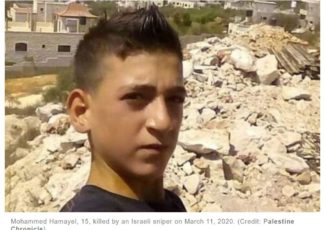 Israel kills 10,000th Palestinian since 2000, US media largely ignore it

If Americans Knew Blog: By Alison Weir: Israeli forces invading Palestinian Territory have just¬†killed a 15-year-old¬†unarmed Palestinian boy. A sniper shot him in the head with an expanding bullet. This is the 10,000th¬†Palestinian killed by an Israeli since the round of violence that began in fall 2000. The boy was¬†reportedly¬†shot […] 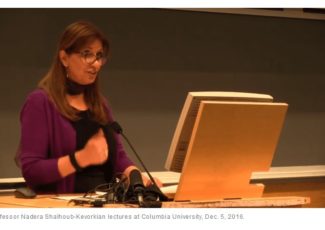 Israeli occupation authorities have permitted large pharmaceutical firms to experiment on Palestinian¬†prisoners, and have been testing weapons on Palestinian children, a Hebrew University professor disclosed in a recent lecture series.¬† by Kathryn Shihadah An Israeli professor disclosed in a recent lecture series at Columbia University that Israeli authorities have permitted […] 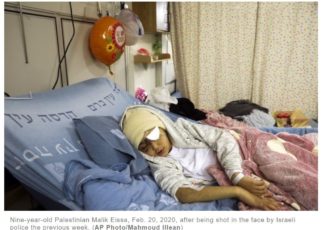 The Post says there had been ‚Äúweeks of relative quiet,‚ÄĚ even though Israeli soldiers had shot over 100 Palestinian civilians, killing four of them; conducted 400+ invasions of the Palestinian Territories; abducted dozens of Palestinians; perpetrated air strikes on Gaza; shot at fishermen and farmers; demolished Palestinian homes; tortured a […] 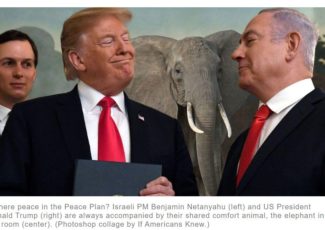 The Trump-Kushner ‚ÄúPeace‚ÄĚ Plan is slick and businesslike, with an aura of objectivity and balance ‚Äď but it is exactly the opposite, and something about it stinks. by Kathryn Shihadah There is a giant herd of elephants circling the Trump-Kushner Peace Plan, and they‚Äôre not going away. The fragrance of […] 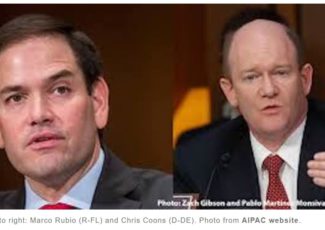 After original bill stalled in 2019, Rubio & Coons introduce new bill expected to give Israel at least $38 billion over the next 10 years ‚Äď over $7,000 per minute

News analysis by Alison Weir –¬†Republican Marco Rubio and Democrat Chris Coons have introduced legislation expected to give Israel a minimum of $38 billion over the next 10 years. (The text for the bill,¬†S.3176, is not yet available on the Congressional website.) The new bill has been introduced because a […] 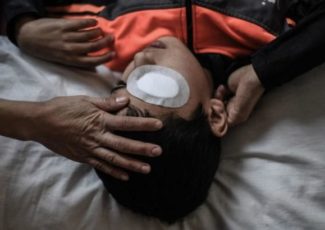 Eyes are a ‚Äėcommon target‚Äô of Israeli snipers at Gaza‚Äôs Great March of Return. To date, Gaza‚Äôs Ministry of Health reports that Israeli soldiers have shot 50 men, women, and children in the eye since the weekly demonstrations began last March, leaving many permanently blind. by Tareq Hajjaj and Pam […] 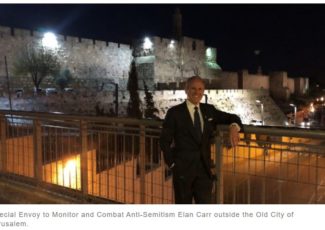 Trump‚Äôs anti-Semitism envoy inaccurately equates anti-Zionism with anti-Semitism, and considers Israel ‚Äúa central tenet‚ÄĚ of Judaism ‚Äď despite vocal opposition from within the global Jewish community‚Ä¶ Carr demands: ‚ÄúEvery law enforcement office and every prosecutorial agency must force everybody who has even a hint of antisemitism to undergo a tolerance […] 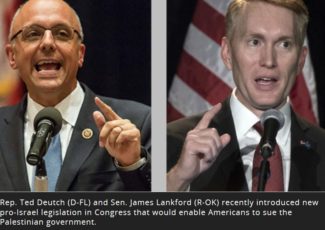 New Legislation in Congress Puts Palestinians in a Catch-22 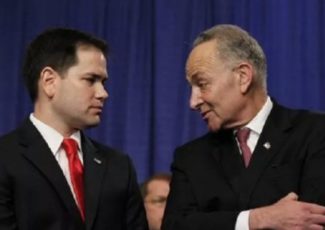 Senators Mark Rubio (R-FL) and Chuck Schumer (D-NY), Nov. 4, 2015. (Photo from Jewish Insider.) Phone and email your senators NOW to¬†vote no on Senate bill S.1! The latest news is that Democrats may try to prevent today‚Äôs action on the bill (over concerns over the government shutdown), so phoning […] 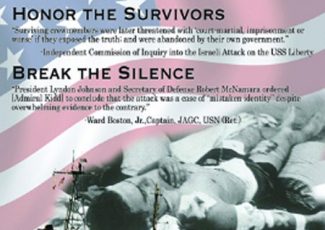 If Americans Knew:¬†While we mourn the latest unarmed demonstrators ruthlessly killed by Israeli forces in Gaza, we also wish to remember others killed by the Israeli military 51 years ago today. On June 8, 1967, Israeli¬† jets and torpedo boats tried to sink the¬†USS¬†Liberty, a U.S. Navy technical surveillance ship, […] 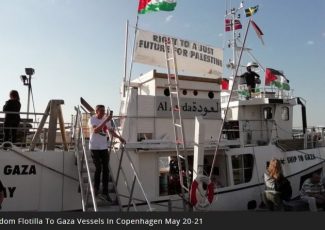 from Freedom Flotilla Coalition: Just before noon local time (May 23,2018), the Freedom Flotilla vessel¬†Al Awda¬†(The Return) was boarded by the German Coast Guard, at the orders of the German Ministry of Interior. They collected all the passports on board, wrote down everyone‚Äôs personal data, searched the vessel thoroughly, asked […] 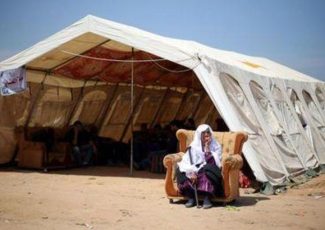 ¬†All hands on deck: the Global Campaign to Return to Palestine needs our help to educate Americans about the Great March of Return. They propose a ‚Äútent campaign,‚ÄĚ a rich metaphor for refugees and demolished homes. Here are instructions, plus an offer from If Americans Knew for free materials to […] 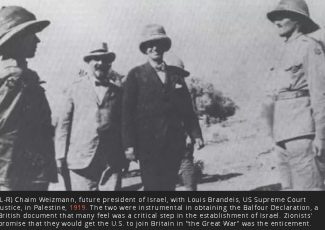 Who Wrote the Balfour Declaration and Why: The World War I Connection

¬†CONTACT@IFAMERICANSKNEW.ORG¬†¬†OCTOBER 24, 2017¬†¬†BALFOUR DECLARATION,¬†FIRST WORLD WAR,¬†LEOPOLD AMERY,¬†LOUIS BRANDEIS,¬†WWI (L-R) Chaim Weizmann, future president of Israel, with Louis Brandeis, US Supreme Court Justice, in Palestine,¬†1919. The two were instrumental in obtaining the Balfour Declaration, a British document that many feel was a critical step in the establishment of Israel. Zionists‚Äô promise […]