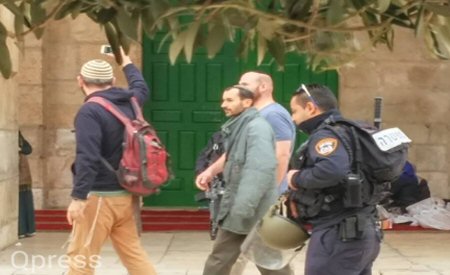 Israeli settlers, on Sunday morning, stormed the courtyards of Al-Aqsa Mosque via the Moroccan Gate, accompanied by occupation police.

According to Al Ray sources in Jerusalem, 60 Israeli settlers stormed the mosque in the company of rabbis, carrying out provocative tours in its courtyards, and receiving explanations about the alleged historic temple.
Israeli settlers storm the Islamic holy site on a daily basis, in the attempt to divide the mosque temporally and spatially, to Judaize the city of Jerusalem.
Archive IMEMC post 06/12/16 Rabbi Lau: 3rd Temple Can be Built Without Destroying Al Aqsa