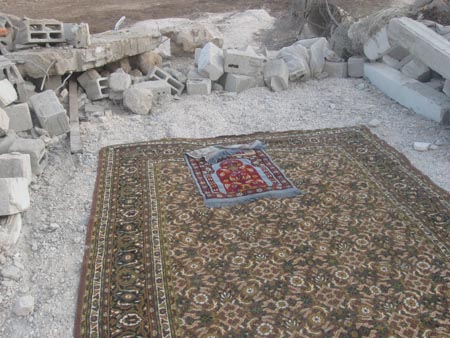 In its Weekly Report On Israeli Human Rights Violations in the Occupied Palestinian Territories for the week of 25 Nov. – 01 Dec. 2010, The Palestinian Center for Human Rights found that Israeli forces continued to fire at Palestinian workers, farmers and fishermen in border areas in the Gaza Strip, and to use force against peaceful protests in the West Bank. Settlement activities and home demolitions continued, including the demolition of a mosque.10 Palestinian workers, one farmer and one fisherman were wounded in the West Bank. A Palestinian civilian was wounded by Israeli gunfire in al-‘Eissawiya village near Jerusalem.

Israeli forces conducted 35 incursions into Palestinian communities in the West Bank, and two limited ones into the Gaza Strip, during which they abducted 8 Palestinian civilians, including a member of the Palestinian Legislative Council, and summoned 13 others for interrogation.

In the Gaza Strip, Israeli forces fired at Palestinian workers who were collecting raw construction materials, at fishermen and at farmers. As a result, 10 workers, one farmer and one fishermen were wounded by Israeli gunfire. The wounded include two children.

On November 25th, at approximately 07:00, Israeli forces moved nearly 350 meters into the northeast of the Bedouin Village in the northern Gaza Strip. They leveled areas of Palestinian land.

In another example of the attacks by the Israeli military this week in the Gaza Strip, on Saturday, 27 November 2010 at approximately 09:10, Israeli soldiers stationed on observation towers on the border between the Gaza Strip and Israel to the northwest of Beit Lahia town opened fire at a number of Palestinian workers from a site where the evacuated Israeli settlement of ‘Elli Sinai’ used to stand. As a result, Shamekh Sa’id al-Debes, 16, from Jabalya town, was wounded by a bullet to the left leg, when he was nearly 150 meters away from the border.

At approximately 12:30 pm on the same day, Israeli soldiers stationed on observation towers at the beach to the northwest of Beit Lahia town in the northern Gaza Strip opened fire at a number of Palestinian fishermen who were fishing nearly 350 meters away from the border between the Gaza Strip and Israel. As a result, Ahmed Mahmoud Jarbou’, 26, from al-Shati refugee camp in the west of Gaza City.

And at approximately 14:00, Israeli soldiers stationed on observation towers near Beit Hanoun (Erez) crossing in the northern Gaza Strip opened fire at a number of Palestinian workers who were collecting raw construction materials from the debris of buildings in Erez industrial zone. As a result, Khaled Ashraf Abu Sitta, 21, from Beit Hanoun town, was wounded by a bullet to the left leg.

At approximately 13:00 on Monday, 29 November 2010, Israeli soldiers stationed on observation towers on the border between the Gaza Strip and Israel near Beit Hanoun (Erez) crossing in the northern Gaza Strip opened fire about 50 non-violent demonstrators, including 7 international solidarity activists, who demonstrated nearly 50 meters away from the border in protest of the establishment of a restricted buffer zone along the border. No casualties were reported.

In addition to the shootings, Israel has continued to impose a total siege and has isolated the Gaza Strip from the outside world.

In one example of the 35 invasions this week, at around 1:00 am on November 25th, Israeli forces invaded the village of Beit Ummar near Hebron and abducted four men, organizers of non-violent weekly anti-Wall protests in the village. They also confiscated a laptop and some personal belongings of one of the men. On Sunday evening, 29 November 2010, Israeli forces released the four men after forcing them to sign oaths not to be present near ‘Karmi Tsur’ settlement to the south of Beit Ummar village.

In another of the 35 invasions, on November 25th, At approximately 17:00, Israeli forces moved into the western neighborhood in Tulkarm. They patrolled in the streets for some time. They stopped near Ajnadin School. An Israeli soldier stepped out of his truck and beat 11-year-old Wa’ed Fat’hallah al-Hamshari, who was playing in the area. Israeli forces also confiscated the child’s bicycle. Israeli forces withdrew from the town later and no arrests were reported.

At approximately 21:50 on the same day, Israeli forces moved into Kharabtha al-Misbah village, west of Ramallah, and patrolled the streets. A number of Palestinian boys gathered and threw stones at Israeli forces military vehicles. Immediately, Israeli soldiers fired at the boys, but no casualties were reported.

Israel has continued its settlement activities in the West Bank and East Jerusalem in violation of international humanitarian law, and Israeli settlers have continued to attack Palestinian civilians and property.

On 25 November 2010, the Israeli Municipality of Jerusalem waged a campaign against owners of shops in Hazma village near Jerusalem. They demolished 9 shops claiming that their owners do not have licenses. Losses are estimated at more than 1.5 million NIS (around $250,000 USD).

On the same day, Israeli forces demolished a house and a printing press in al-‘Eissawiya village near Jerusalem.

Israeli forces demolished a house in al-Tour neighborhood in Jerusalem.

During the reporting period, the organization committee in the Israeli Municipality of Jerusalem approved the construction of 130 housing unit between ‘Gilo’ settlement and Beit Safafa village. The committee approved turning the area, which was devoted to the establishment of hotels, into a residential area.

On 01 December 2010, the Israeli district committee of organization and construction approved the construction of 625 housing units in ‘Pisgat Ze’ev’ settlement, northeast of Jerusalem. It is worth noting that the Israeli occupation authorities have started to construct another 1,300 housing units in Israeli settlements in Jerusalem and 1,000 ones in settlements in the West Bank, since the end of the temporary freezing of settlement activities on 25 September 2010.

On 25 November 2010, Israeli forces demolished a mosque, a house and 10 barracks in Kherbat Yazra village, east of Tubas, in the northern Jordan Valley.

On the same day, Israeli forces moved into al-Dairat area to the east of Yatta village, south of Hebron. They demolished a house in the village.

Also on the same day, Israeli forces handed two notices to Mousa Taha and Hussein Shamsna, fom Qatna village northwest of Jerusalem, that their animal farms would be demolished.

Construction of the Annexation Wall, and harassment of peaceful protests at Wall construction sites, continued this week in the West Bank. When complete, the illegal Annexation Wall will stretch for 724 kilometers around the West Bank, further isolating the entire population. 350 kilometers of the Wall have already been constructed. Approximately 99% of the Wall has been constructed inside the West Bank itself, further confiscating Palestinian land.
At least 65% of the main roads that lead to 18 Palestinian communities in the West Bank are closed or fully controlled by Israeli forces.

There are approximately 500 kilometers of restricted roads across the West Bank. In addition, approximately one third of the West Bank, including occupied East Jerusalem, is inaccessible to Palestinians without a permit issued by the Israeli forces. These permits are extremely difficult to obtain.

Israeli forces continue to harass, and assault demonstrators who hold peaceful protests against the construction of the Annexation Wall. As a result, 9 Palestinian civilians, including two children, were wounded. Dozens of Palestinian civilians and human rights defenders also suffered from tear gas inhalation and others sustained bruises. Israeli forces also abducted 5 international and Israeli human rights defenders and a Palestinian child from the non-violent protests.

Following the Friday Prayer on 26 November 2010, dozens of Palestinian civilians and international and Israeli human rights defenders organized a peaceful demonstration in protest to the construction of the Annexation Wall in Bil’in village, west of Ramallah. They moved towards the annexation wall. Israeli soldiers stationed in the area fired rubber-coated metal bullets, sound bombs and tear gas canisters at the demonstrators. As a result, a number of demonstrators suffered from tear gas inhalation and others sustained bruises as they were beaten by Israeli soldiers.

Also following the Friday Prayer on 26 November 2010, dozens of Palestinian civilians and international and human rights defenders organized a peaceful demonstration in Ni’lin village, west of Ramallah, in protest against the construction of the Annexation Wall. They clashed with Israeli troops positioned near the Wall. Israeli troops fired rubber-coated metal bullets, sound bombs and tear gas canisters at demonstrators. As a result, dozens of demonstrators suffered from tear gas inhalation, and others sustained bruises.

Also following the Friday Prayer on 26 November 2010, dozens of Palestinian civilians and international and Israeli human rights defenders organized a peaceful demonstration in Nabi Saleh village, northwest of Ramallah, in commemoration of the late Palestinian President Yasser Arafat, and in protest against land confiscations in the Wad al-Raya area between the villages of Nabi Saleh and Deir Nizam. When the demonstrators attempted to reach areas of land seized by Israeli settlers near ‘Halmish’ settlement, Israeli troops fired rubber-coated metal bullets, sound bombs and tear gas canisters at them. A number of demonstrators also suffered from tear gas inhalation. Israeli forces also chased the demonstrators into the village. They also turned a house belonging to Helmi Tamimi into a military site. They withdrew from the village at approximately 17:00.

Also on Friday noon, 26 November 2010, dozens of Palestinian civilians and a number of international human rights defenders organized a peaceful demonstration in al-Ma’sara village, south of Bethlehem. They moved towards the annexation wall in the north and northwest of the village. Israeli forces reinforced their presence at the entrance of the village. They attacked the demonstrators and fired tear gas canisters and sound bombs at them. As a result, 6 demonstrators, including 15-year-old Mo’tassem Mos’ad Fawaghra, suffered from tear gas inhalation.