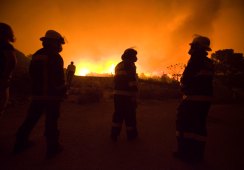 Palestinian president, Mahmoud Abbas, received on Friday a phone call from Israel’s Prime Minister, Benjamin Netanyahu, for sending Palestinian firefighters to help in controlling the fires in the north of the country. The Palestine News and Information Agency, WAFA, reported that Abbas told Netanyahu that, under such conditions and disaster, the Palestinians will not hesitate in lending a helping hand.

On Friday, fire officials in Israel expressed a cautioned optimism as different rescue teams from Israel and different parts of the world continued to counter the blaze.

Shimon Romah, an official at the Israeli fire department, told Israel’s Army Radio that the current situation is the best since the fires started.

Haaretz added that on Saturday night and by Sunday morning, the fires were still raging in Nir Etzion, Har Shokef, Isifya and Hai-Bar Nature Reserve.

On Saturday evening, the fires reached Ma’alot, the Negev and Taybeh.

The number of casualties stands now at 41 with dozens wounded and massive destruction of property and forest as 50.000 Dunams of land were burnt in the Carmel region, Israeli daily, Haaretz, reported.