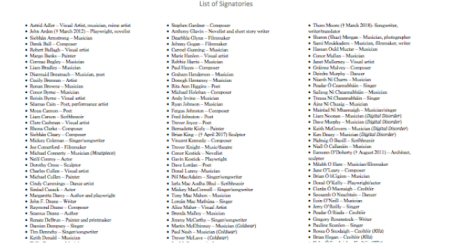 Ireland’s continued support for the Boycott, Divestment, Sanctions Movement has extended into the cultural sphere, as Israel’s hosting of next year’s Eurovision Song Contest may be held without Irish Singers.

A petition created by the Ireland-Palestine Solidarity Campaign commits signatories to refrain from performing in Israel or accepting any funding related to Israel’s government.

The rationale for this comes from Israel’s documented attempts to establish a propaganda campaign that would give western countries the impression that Israel is an important patron of artistic and democratic values, while minimizing the image of Israel as an apartheid state.

According to a former Israeli Foreign Minister, Israel’s goals are to promote “culture as a propaganda tool of the first rank” while making sure not to “differentiate propaganda and culture.”

With the Eurovision Song Contest being hosted in Israel, their efforts to promote themselves as a culturally sensitive democracy will be tested by what the Boycott, Divestment, Sanctions Movement will be able to protest.

According to the PNN, this cultural petition was modeled after the successful campaign to boycott Apartheid South Africa in response to the appalling treatment of the native population.

Other countries have had similar successes, such as Switzerland, South Africa, and Britain.

“Sadly, this pledge remains as necessary as when it was launched eight years ago,” said Chairperson of Ireland-Palestine Solidarity Campaign Fatin Al-Tamimi.

“Western governments’ continued failure to sanction Israel means it remains necessary for civil society to take action for justice for Palestine. This pledge allows people from the artistic community to take a stand in solidarity with the Palestinian people.”