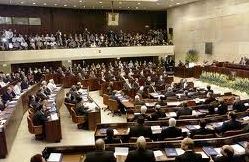 The Legal Committee of the Israeli Knesset decided on Monday to approve a new draft submitted by the Israeli Interior Minister, Yitzhak Aharanovitch, in which he demanded that Palestinian detainees, imprisoned on nationalistic/political grounds, should not be allowed to meet their lawyers up to six months after their arrest, the Maan News Agency reported.Originally, though not always the case, Israel allows Palestinian detainees to meet their lawyer three weeks after they are arrested. Hundreds of detainees never met their lawyers before court.

Israeli TV, Channel 10, reported that during its Monday meeting, the Legal Committee accepted the claims of Aharanovitch in which he claimed that security detainees provide their lawyers with sensitive security information that could lead to attacks against Israel.

The law also authorizes prison directors to prevent visitations up to 96 hours instead of the originally allocated 24 hours.

Under the new law, prison managers are also allowed to extend the visitation ban up to two 14 days instead of the currently allocated five days. They only need to consult with the Legal Adviser or his aid.