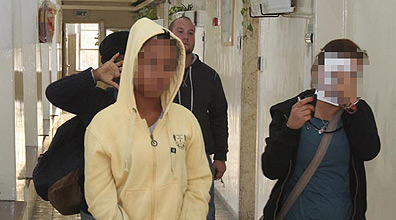 The Israeli Police reported that seven Israeli children, aged 14-17, and two settlers, aged 24 and 26, were arrested in Jerusalem for carrying out attacks against Arab youths by first “having a teenage Jewish girl seduce them, and lead them to a secluded place”.The Jewish teenage girl, 14, has the role of “seducing” young Arab men to have them follow her to a secluded place where they will be attacked by a group of extremist settlers.

The Jerusalem District Court granted three of the arrested teenagers a conditional release, but did not define the number of victims.

The attacks were carried out in different parts of the city, including to the so-called “Independence Park”.

The police opened an investigation into the issue after a number of complaints were filed by several Arab youths.

The initial police investigation revealed that the gang was led by a 14-year-old Jewish boy who used the help of “a beautiful young woman”, also 14, who had the task of seducing young Arab men to secluded areas in the city to be attacked by gang members.

The police believes that the 14-year-old girl participated in at least three attacks.

The young Arab men, who were the victims of these plots, were attacked by gang members using sticks, empty bottles, teargas, and other materials.

In one incident, gang members kept beating a young Arab man until he lost consciousness, and only left after they though that he died.

Most of the racial attacks were carried out on Thursdays, and during evening hours on Saturday’s.

Although the police has been investigating the incident since many weeks now, a progress was only made two weeks ago when a member of the gang was arrested and told the police the names of his partners in crime.

The police then arrested the rest of the gang members and questioned them. Some of them already had criminal records for assaults offenses carried out in the city.

The police announced that more arrests will be made soon against persons involved with the gang, or those who knew about their attacks but never reported them.