Agricultural Export From Gaza To Europe To Resume Next Week 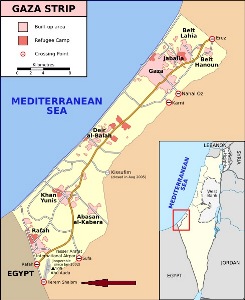 The Israeli Radio reported that the Security and Political Ministerial Council of the Israeli Government has approved the a decision to allow the exports of agricultural products from the besieged Gaza Strip into Europe. All exports were halted more than three and a half years ago as part of the Israeli siege on Gaza.

The first export from Gaza will include 50 Tons of Pepper and will be transferred out of the strip through the Karem Abu Salem “Kerem Shalom Crossing”.

Israel imposed a deadly siege on Gaza in June of 2007 leaving the residents without basic supplies and essential goods and medical supplies.

The number of patients who died in the Gaza Strip due to the siege as Israel prevented them from leaving the coastal region for medical treatment elsewhere is more than 200.

According to Ahmed Al-Ashi with the Gaza Ministry of Health, only 37% of necessary medicines have been allowed to enter the Gaza Strip this year, due to the ongoing Israeli blockade on Gaza. Israel controls all entry and exit of goods and people from the Gaza Strip, and has prevented nearly all access to the Strip, and allowed in only a trickle of goods, over the last four years.

Among the medicines that are out of stock are drugs needed to treat cancer and kidney failure. Al-Ashi called on the international community to pressure Israel to lift the blockade on Gaza, and to demand that the needed medicines be allowed to enter.