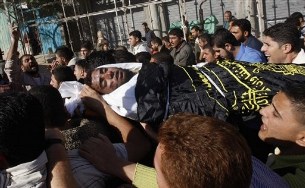 The Al Quds Brigades, the armed wing of the Islamic Jihad, reported that two of its fighters were killed on Saturday at dawn during clashes with Israeli soldiers invading an area east of Khan Younis, in the southern part of the Gaza Strip.The Brigades identified the slain fighters as Mosab Abu Rock and Mahmoud Yousef Al Najjar, both from Khan Younis district and in their twenties.

The Brigades stated that a group of its fighters managed to identify undercover Israeli forces infiltrating into the area, exchanged fire with them and also fired a number of mortars at an Israeli military force invading an area close to where the clashes took place.

The Israeli army stated that Hamas is responsible for the recent tension in the Gaza Strip and that its fighters are interested in a military escalation.

On Saturday, Hamas held a rally commemorating the Israeli war on Gaza two years ago and warned Israel of any military escalation in the area.

The Israeli army shot and killed 13 Palestinians, mainly farmers and workers, who approached areas close to the border fence between the Gaza Strip and Israel.