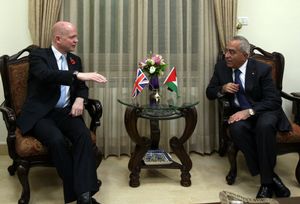 Britain plans to support an upgrade of the diplomatic status of PLO officials in the UK, media agencies reported on Monday. British Foreign Secretary Hague may raise the status of the Palestinian representative’s office to a full diplomatic mission in London following recent collapse of the series of US-sponsored peace talks.

Hague’s planned move comes in response to latest progress made in state-building preparations by the PA leadership in the West Bank. Although symbolic, the decision is being contemplated at time when Israel is under increasing pressure in the face of Palestinian efforts to achieve international recognition ahead of peace negotiations, failed after the US gave up on convincing Prime Minister Netanyahu to renew a settlement moratorium.

The UK upgrade would provide ambassador status to officials, currently representatives in London, making the new status equal to officials representing any other sovereign state. Britain does not intend to follow the example of recognitions of Palestinian statehood expressed by Latin American countries lately.

The move is reported to have no practical impact on the daily working of the Palestinian representative in London, however it would probably ensure the delegation can call itself a ‘mission’, and would assign an automatic right of future representatives to refer to the Foreign Secretary after their first arrival in the UK.

The British government’s upgrade of the PLO missions status follows similar initiatives taken by France, the US, Spain, Portugal and Norway in their capital cities, since last summer.

Britain risks upsetting the Israeli government by extending diplomatic representation of the PLO. Earlier this month, Israel slammed the decision of Norway to upgrade the Palestinian representative in Oslo.

The timing of any British initiative has been complicated by the intensified diplomatic climate after the stalling of peace talks. The Independent quoted Israeli daily newspaper Haaretz reporting, last week, that Rafael Barak, Director general of the Foreign Ministry, sent a cable to its embassies, warning them on a diplomatic effort by the Palestinians due to lack of progress in the peace process: seeking a UN resolution condemning Israeli settlements; obtaining international recognition of a Palestinian state within the 1967 borders; and demanding upgrades in diplomatic representation in Europe and beyond.

Israeli cabinet minister MK Ben Eliezer warned telling Ma’an News one day before: ‘I would not be surprised if within a year the entire world, even the US, recognizes a Palestinian state, then we will have to explain how this happened.’

Israel criticizes such moves arguing they contribute to deluding the Palestinian leadership into thinking it may be possible to form a state without direct negotiations. The Israeli government opposes any recognition of a Palestinian state pointing out that its creation must be reached through negotiations, and not via a unilateral move, which is the same position supported by the United States.