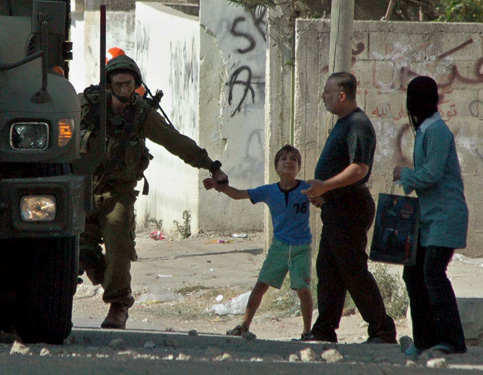 The Palestinian Authority Ministry of Detainees’ Affairs reported, on Wednesday, that Israeli forces arrested 1,100 Palestinian children in 2010, most of them in East Jerusalem and Hebron. In a report, PA Detainees’ Affairs Minister Issa Qaraqe claimed that these arrests are reflecting the systematic attacks that Palestinian youth suffer in the Occupied Territories on the daily basis.

He also stressed that during 2010 the higher number of detentions were made in the occupied East Jerusalem, about 500, and Hebron, stressing that children were often put under house arrest.

In addition, the report also denounced other practices that the Palestinian children suffer from the Israeli army, especially, its use as human shields.

According to Defence of Children International – Palestine, since April 2004, 16 Palestinian children suffered from this practice, although it is considered illegal by both international and Israeli law.

Recently, two soldiers from the Givati Brigade became the first soldiers to be charged and convicted of using a child as a human shield. The two soldiers were demoted from the rank of staff sergeant to sergeant and each given a three-month suspended prison sentence.