Another Way to Remember the Gaza War 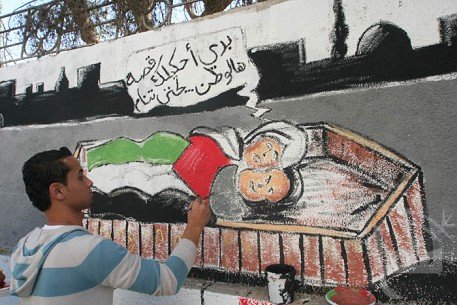 Marking the second anniversary of Israel’s offensive on the Strip, two youth groups in Gaza City are painting murals in the destroyed government compound, Ma’an News reported.The Cultural Club and Free Spectrum, which have organized the activity, aim to show the Palestinian suffering, condemning the war and Israel’s blockade of the coastal enclave.

According to the Free Spectrum coordinator Mohammad al-Herbawi, the murals are a demand ‘to live in dignity and freedom like other nations around the globe. We [Gazans] are asking all the free people around the world to stand by our people until they gain their freedom,’ Ma’an News quoted.

He also called on the Palestinian unity, due to, in his opinion; the national division encourages Israel to commit more crimes against Palestinians.

The Israeli ‘Operation Cast Lead’ offensive on Gaza in the winter of 2008–2009 left 1,400 Palestinians dead and decimated the Strip, leaving the inhabitants in a difficult situation to overcome.