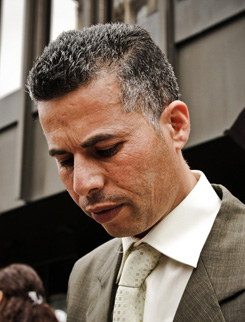 On Monday, Mohammad Khatib, the coordinator of the Popular Committee Against the Wall and Settlements, was acquitted of all charges as the Israeli prosecution could not present credible evidence.lack of sufficient evidence.Khatib was exonerated at the Ofer Military Court of charges of incitement, performing a service for an unlawful association and obstruction of a soldier. Judge Sharon Rivlin’s decision noted that the evidence brought forth by the prosecution was insufficient and did not personally implicate Khatib in any offense.

Mohammed Khatib is a founding member of the Bil’in Popular Committee Against the Wall and Settlements, which was formed in 2004. The Committee began organizing regular demonstrations against the construction of the Separation Barrier on Bil’in’s lands in February 2005. The campaign led to an Israeli High Court of Justice ruling in September 2007, which declared the path of the Wall on Bil’in’s lands illegal and ordered it to be rerouted. More than three years later, the original and illegal path still stands and demonstrations continue on a weekly basis.

Khatib is also a founding member and coordinator of the Popular Struggle Coordination Committee (PSCC), an umbrella organization uniting popular committees from across the West Bank, providing organizational infrastructure, resources and mutual support for the Palestinian popular struggle movement.

Mohammed Khatib was arrested on August 3rd, 2009, during a military raid on his house in Bil’in. He was subsequently charged with incitement, obstruction of a soldier, performing a service for an unlawful association, throwing of objects [i.e. stone-throwing]

The charges are all based on the testimonies of three minors, Hammouda Yassin (17), Kamel Khatib (16) and Khalil Yassin (16), who were arrested by the military during night-time raids. In a complete disregard for regulations on questioning minors, they were interrogated without the presence of either their lawyer or a family member.

The minors’ incriminating testimonies serve as the basis for the indictment. They are extremely general in nature, without citing specific events, dates or places.

Khatib was subsequently released on conditions severally limiting his rights to freedom of speech and freedom of expression – most notably that he does not participate in demonstrations and that he reports to a police station on Fridays (when demonstrations are taking place) between noon and 16:00.