‘Soldiers, Settlers, and the Police are the Occupation”: Palestinian Life Inside a Settlement 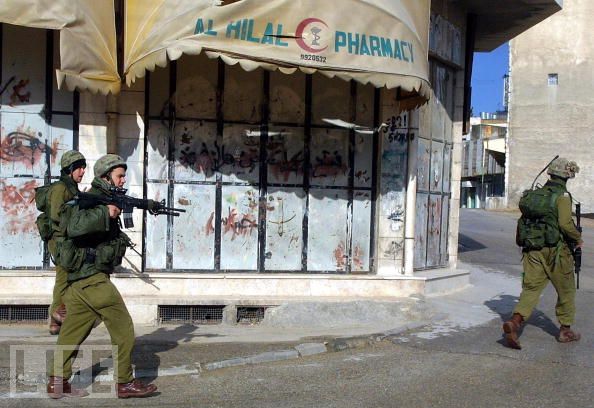 Hani Abu Haikal and his family live in Hebron’s H2, which is under Israeli control. They are part of the 30,000 Palestinians that live among 500 settlers in this part of the city. Life for Palestinians inside H2 is extremely difficult, with many of them facing settler harassment, movement constraints, and a large military and police presence serving settlers’ interests, even if most attacks are directed at Palestinians.
Hani and his family have to deal with all these issues, in addition to the fact that they live deep inside the Tel Rumeida settlement, surrounded by settlers on all sides. Only around five Palestinian families remain inside, while many have left because of the troubles they faced. The situation got especially bad during the second Intifada, in 2000, when there was a curfew imposed on Palestinians for three years. This meant that Palestinians could not work, or go to school, among other much needed activities needed to survive.

Many restrictions continue to exist for families inside the settlement. They cannot have guests without getting prior permission from Israeli authorities. This includes family member and friends, and even ambulances and doctors. Israeli authorities reject around 60% of their requests for visitors. This makes life for Hani’s family very difficult, especially for his mother who is very sick and old. She cannot walk, so she needs to have doctors come inside the settlement to visit her.

There are many other restrictions that Hani’s family has to deal with. Palestinians have no permission to own cars so they have to walk everywhere, and carry everything to their home. Settlers on the other hand, can have as many cars as they want. Palestinians inside the settlement live under martial law, while the Israelis live under civilian law. Palestinians constantly face harassment at the hands of settlers. Settlers have beaten up Hani’s son, without any repercussions. In the past, when Hani was able to own cars, settlers burned more than six of his cars. Settlers have also repeatedly damaged and burned his land.

Recently, an empty Palestinian home was taken over by settlers. The Palestinian owner of the house has an Israeli Supreme Court order to evacuate the settlers, but the police have not followed the order.

On Wednesday, January 5, Hani had a visit from the recently appointed Hebron governor, Kamil Hamid as well as Palestinian Authority doctors, who came to visit Hani’s sick mother. As is the case with all people coming to visit his home, he had to get special permission from Israeli authorities to allow the visit. It took two weeks to get the permission. It was also promised that the military would protect the governor from settler attacks.

Things did not turn out so smoothly, however. The governor faced settler verbal and physical attacks, without any protection from the military or police. Baruch Marcel, the founder of the extreme right-wing Jewish National Front party, who also lives in the Tel Rumeida settlement, lead and gathered all the settlers. The Israeli military and police stood by while the attacks were happening, and Hani and his body guards had to rush over to protect the governor.

After the governor, the doctors and Hani were able to get inside his home safely, they were trapped inside for three hours while the settlers’ mob remained outside. Soldiers tried to get the governor to leave the building from the back, but he refused, and said “I am a governor, I am not a thief. I come with special permission, under Israeli protection and I’m supposed to come back as I came in.”

For Hani, this incident was indicative of the troubles Palestinians face in Hebron’s H2. “I liked what happened because the governor saw what our real lives are like here” Hani said. It was an opportunity for the governor to see the unfair treatment that Palestinians receive from Israeli authorities. Even with all the preparation that went into having the governor visit Hani’s home, he was still not provided with the protection he was promised. This shows that the Israeli system is unjust in its treatment of Palestinians, even if they are high government officials.

According to Hani, the occupation’s strength comes from soldiers, settlers, and police working together to uphold the occupation. There is a misconception that the Israeli soldiers and police uphold the system of law and justice, and protect everyone equally. He says. “Anyone who lives here like me knows that the soldiers, the police and the settlers are a team that work together.” he says. “The settlers, they attack us. The solders give settlers protection. And the police arrests us.” This team works together to implement and enforce Israel’s efforts at population transfer of Palestinians from areas Israel wants to control. Life is made so difficult for Palestinians that they often have no other choice but to leave.