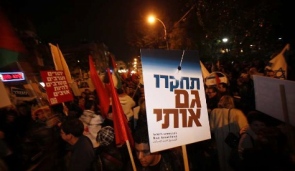 On Saturday, thousands of Israelis marched in Tel Aviv under the banner ‘Demonstration (since it’s still possible) for democracy’ – a reference to a proposed measure currently under consideration in the Israeli Knesset that would require investigations of Non-Governmental Organizations (NGOs) which criticize the actions of the Israeli military.The marchers gathered for a rally in front of the Tel Aviv Museum of Art, where Knesset (Parliament) members and human rights leaders addressed the crowd. They challenged what they called a ‘culture of racism’ that they say has pervaded the Israeli Knesset, under the leadership of Israeli Foreign Minister Avigdor Lieberman.

Knesset Member Nitzan Horowitz, with the Meretz party, told the crowd, ‘We are here in opposition to religious radicalization, racist laws, and sickening incitement against foreign workers and against those who are not loyal to Lieberman. And now they are putting human rights organizations in the crosshairs. They don’t want to investigate the Carmel fire, so what do they investigate? The free people.’

Horowitz’ sentiments were supported by the other speakers at the rally, including Knesset Member Meir Sheetrit, with the Kadima party, who said, ‘I, like you, came here to protest this foolish and undemocratic action. I want to remind my friends in the Likud that Jabotinsky would turn over in his grave if he saw them supporting this action that is contradictory to his beliefs. This decision by the Knesset is offensive and dangerous to the state of Israel, causing grave damage to the name of the state, as it makes Israel one of the states of darkness.’

Protesters carried signs condemning what they called ‘The End of Democracy’ in Israel, and ‘Fighting the Government of Darkness’, which they associate with current Israeli Prime Minister Binyamin Netanyahu and his Foreign Minister Avigdor Lieberman. The Director of Peace Now (Israel’s largest peace group) Yariv Oppenheimer spoke of ‘the Lieberman threat’, saying that this threat is a ‘greater threat than Iran’.

Hagai Elad of the Association for Civil Rights in Israel told demonstrators, ‘We are voicing a clear voice in support of human rights and democracy, and against racism, McCarthyism and future destruction. We will continue to fight for democratic values, freedom of speech, equal rights for all citizens and an end to the occupation.’

The protest was called after the Israeli Knesset voted last week to consider a measure calling for the investigation of any NGO accused of being involved in a ‘delegitimization campaign’ against the Israeli military. Groups that have been accused in the past of engaging in such campaigns include Physicians for Human Rights and the Israeli human rights group B’Tselem, which documents abuses by the Israeli military against Palestinian civilians.