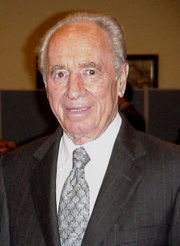 Israeli President, Shimon Peres, stated during an interview with Israel’s daily, Haaretz, that the formation of a parliamentarian committee to investigate the sources of funding sent to non-governmental Organizations harms democracy in the country. He called on the Knesset to oppose the move that was presented to the Knesset by Yisrael Beiteinu (Israel Our Home) extremist party, headed by Foreign Minister, Avigdor Lieberman.

Peres said that democracy in Israel must be protected, and that political powers should not interfere with the work of human rights groups.

He added that there are laws in Israel that allow monitoring the work of NGOs regardless of their political affiliation.

Haaretz reported that Peres seemed extremely worried after a draft law was presented to the Knesset regarding investigating funding sources of left-leaning human rights groups in Israel.

He considered the move as a violation to the principles of democracy, and as an issue that increases right-wing fundamentalism in Israel.