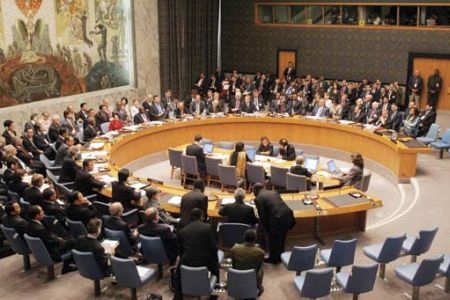 Arab envoys resolved to present a formal draft resolution opposing Israel’s illegal settlement construction at the UN Security Council, AFP reported on Tuesday. Tunisia’s UN envoy Ghazi Jomaa told reporters after their meeting on Monday that the representatives of Arab nations decided to submit the resolution to the UN Security Council requesting the condemnation of illegal settlement building activity in the West Bank before the end of Tuesday.

Jomaa, chairman of the Arab group, explained that the draft demands a total freeze on Israel’s illegal construction activities in occupied Palestinian territories.

The Security Council is scheduled to debate the Middle East and the Israeli-Palestinian conflict on Wednesday; however a vote is said to be almost impossible.

Palestinian and other Arab negotiators are reportedly attempting to pressure the US not to obstruct the motion. Although US President Obama has strongly opposed Israel’s settlement building projects, resolutions condemning Israel are known to be vetoed by the United States.

Nawaf Salam, ambassador of Lebanon and the current Arab representative in the Security Council, anticipated future meetings would be held to decide when to press for a vote.

If passed, the resolution would put pressure on Israel’s Prime Minister Netanyahu to curtail Israel’s settlement activity. However, if the US indicates that it would veto the resolution, Arab states may not call for a vote in order to avoid a confrontation on the international platform, diplomatic sources said.

Since copies of the resolution were distributed to the UN Security Council members last December 17, there have been informal talks with the major powers.

Britain, France, China and Russia, permanent members of the Security Council, are thought to have no objections to vote for the draft. The Palestinian delegation believes 14 of the 15 nations on the council would support the resolution now.

PLO negotiators see Israel’s settlement activities as a stumbling block to the start of new direct negotiations. US-sponsored direct peace talks collapsed last September after Israel refused to extend a freeze on settlement building. Tel Aviv argues that the construction should be an issue discussed in direct talks.