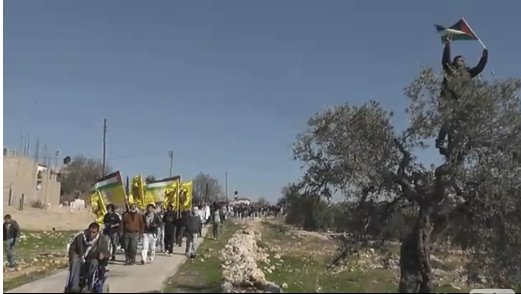 At the non-violent anti-Wall protests which took place on Friday afternoon, Israeli troops fired CS gas and other so-called ‘non-lethal’ weapons at demonstrators in Bil’in, Nil’in, and Nabi Saleh villages in the central West Bank, in addition to Al Ma’sara in the south. A 12-year old was wounded.Protesters in Bil’in village, which has been the site of weekly non-violent demonstrations every Friday, held posters with the face of Israeli activist Jonathan Pollack, a 28-year old former Air Force pilot currently in prison for ‘illegally demonstrating’ against the Israeli occupation.

Israeli and international supporters joined the village after the midday prayers and marched to the Israeli wall built on lands taken from local farmers in Bil’in. As soon as marchers reached the gate of the wall, separating local farmers from their lands, Israeli troops stationed their fired tear gas and rubber-coated steel bullets at them. A number of protesters suffered the effects of tear gas inhalation.

Together, the Israeli, Palestinian and international activists marched to the lands that Israeli authorities are in the process of taking over to construct colonial settlements, while displacing the indigenous Palestinian owners of the land.

Soldiers fired tear gas at the protesters. Ala Barghouthi, 12, sustained light wounds when a soldier sprayed his eyes with pepper-spray. The protest ended with local youth responding to the attack by the Israeli military with stone-throwing.

One arrest of an international supporter was reported during the weekly anti wall protest in the village of al-Ma’sara near the southern West Bank city of Bethlehem.

Local villagers, along with their international and Israeli supporters, marched to the site of Wall construction in their village after midday prayers. Israeli troops stopped them from leaving the village and used rifle-butts and batons to attack some protesters. The soldiers then grabbed an international supporter of the demonstration and took him away for imprisonment, interrogation and deportation.

International activists who are arrested at non-violent demonstrations are deported by Israeli authorities, and banned from the country for ten years.

The village of al-Ma’sara has held weekly protests against the Israeli wall being built on local farmers’ lands every Friday for the last four years.

These weekly anti-Wall protests across the West Bank in villages whose land is being confiscated by Israeli authorities are at the center of a non-violent resistance movement that traces its roots to the inspiration of Gandhi, Martin Luther King, and the South African anti-apartheid movement. Leaders in the non-violent movement in Palestine have been attacked and imprisoned by Israeli authorities, including Abdullah Abu Rahma of Bil’in, who had his sentence extended last week for another six months – he was initially charged with ‘weapon possession’ for shaping a peace sign out of spent tear gas canisters fired by the Israeli military at the non-violent demonstrations in his village.