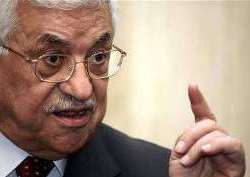 Describing the report of the Qatar-based News Agency, Al Jazeera, as shameful, Palestinian President, Mahmoud Abbas, stated that the report is misleading as it mixed between what Israel is proposing and what the Palestinian Negotiators are demanding.During a Press Conference held in Egypt during a visit to President Hosni Mubarak, Abbas said that the Al Jazeera report “presented the Israeli documents as the Palestinian demands”, and added that this report “is meant to mislead the public”.

The Palestinian President further said that the Palestinian Authority have nothing to hide on the issue, and that all negotiations logs, and all issues discusses, were presented to the Arab countries.

During his visit, Abbas discussed with Mubarak a number of issues topped by the latest developments, and the efforts to revive the stalled peace talks.

He stated that the Palestinians did not hear back from the United States regarding obliging Israel to halt its settlement activities in the occupied territories, including in occupied East Jerusalem, and added that the P.A is heading to the Security Council in an attempt to secure a resolution that would protect the national Palestinian rights.

Abbas further stated that the resolution is now in a blue print, coming up for a vote soon.

The Palestinian President also stated that the position of the European Union regarding this issue is very important, adding that the EU does not replace the United States as a mediator “and does not want to”.

He also slammed the recent bombing that targeted a Church in Alexandria in Egypt, and the heavy human losses encountered due to the attack.

According to Al Jazeera report, Chief negotiator, Dr, Saeb Erekat, stated in 2008 that the then-Israeli Prime Minister, Ehud Olmert, suggested the return of 1000 refugees every year for ten years “on humanitarian purposes”

According to the leaks, the Palestinian Authority demanded Israel to double that number.

President Abbas was reportedly recorded on tape as stating that “it is illogical to demand Israel to agree to the return of five million refugees.

In 2008, Olmert said that the number presented to Abbas was lower than 25000 refugees, and the leaks claim that the Palestinians Authority were willing to accept the return of 15.000 refugees.

There are more than 1.3 million refugees registered outside of Palestine, and the total number of refugees displaced internally, in the Arab World and around the world is estimated by a minimum of 4 million.