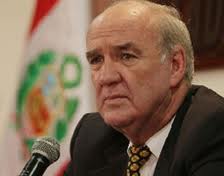 Peru announced on Monday night it recognizes a Palestinian state, becoming the eighth South American country to do so amidst a growing momentum towards global recognition, media agencies reported.Peru recognized a ‘free and sovereign’ Palestinian state on the eve of a Latin American-Arab summit, to be hosted in Lima, indicating strengthening of political and economic ties between the two regions.

Peruvian Foreign Minister Belaunde said in a statement: “This is the eighth recognition of its kind in Latin America. It adds to the success of Palestinian diplomatic efforts aimed at getting as many countries as possible in the world to recognize Palestinian state. This recognition is a direct reaction to all attempts by the Israeli government to stop countries of the world from recognizing the Palestinian right to establish independent state,”

Belaunde also stressed that the declaration was not made under any international pressure, and expressed Peru’s continued support for peace talks.

Peru’s Foreign Minister nevertheless did not specify what borders Peru recognized, only that details of the decision would come later.

The announcement came as a comforting news for Palestinians amid despair over the recent leaked peace talks documents showing negotiators’ compromises with Israel and the US.

The decision followed a set of recognitions led by Brazil and joined by Argentina, Bolivia, Chile, Ecuador and Guyana in recent weeks. The South American states recognized Palestine within the 1967 borders, which include East Jerusalem, the West Bank and the Gaza Strip.

Uruguay and Paraguay have anticipated publicly that they will recognize a Palestinian state in 2011.

Israel slammed South America’s rush to recognition as ‘highly damaging interference’ by countries that were never involved in the Middle East peace process. The US has lobbied the region arguing that recognition is premature.

Brazil and some of the other South American countries have recognized Palestine within the 1967 borders, which include East Jerusalem, the West Bank and the Gaza Strip, lands occupied by Israel since the 1967 Six Day War that ended on June 10, 1967.
added date of the six day war – ‘since the 1967’ to remind readers these lands have been occupied all that time.