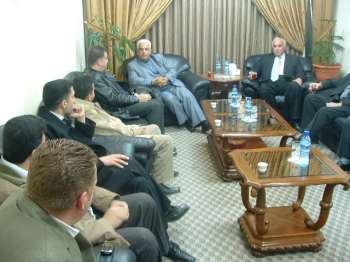 Bakri told Palestinian news wire Wafa on Wednesday: “Al-Jazeera TV is destabilizing the situation and energizing negative elements in the region. What they have done deserves a popular response, because al-Jazeera deviated from the script and started targeting the Palestinian people.”

Al-Bakri is known to be a staunch Fatah ally to President Abbas, reportedly implicated as the man who authorized concessions of Palestinian territory in East Jerusalem, according to the ‘Palestine Papers’.

Mahmoud Ashteeh, Secretary-general of Fatah in the Nablus governorate, said the Qatar-based TV station had “distorted the global image of the Palestinian people and their resistance.” Ashteeh invited all concerned media to attend the protest.

In other news, the PalMedia office in Nablus was vandalized on Wednesday evening just after al-Jazeera crews taped an interview with Professor Abdel Sattar Qasem, from the city’s an-Najah National University, Ma’an News said. Qasem had been reportedly commenting on the documents released by al-Jazeera and The Guardian.

PalMedia workers claimed that five men broke into the office, destroying equipment and turning over furniture, and one had been carrying a gun.

Local police officers opened an investigation however they did not make any comment on the suspects who might lie behind the attack.

Earlier on Monday, a dozen young rioters vandalized al-Jazeera’s office in Ramallah, breaking the security gate of the building and spraying graffiti, in protest against the documents revealed in the series ‘The Palestine Papers’ on Sunday, which detailed peace talks between Israeli and Palestinian negotiators over the last decade

The documentaries produced by al-Jazeera came under harsh criticism by Palestinian officials, who argued the Qatar-based station is pursuing an agenda to undermine the Palestinian Authority and the PLO.