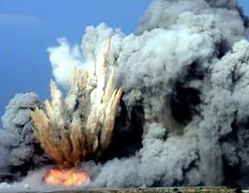 Palestinian medical sources reported that ten residents were wounded in a number of air strikes targeting several areas in the Gaza Strip.Adham Abu Salmiyya, spokesperson of the Higher Committee of Medical Services in the Gaza Strip, reported that eight residents, including two children and three women, were wounded after the army bombarded a medical storage facility east of Gaza City.

Abu Salmiyya added that the facility was completely destroyed while an adjacent carpentry workshop was badly damaged.

Furthermore, the Israeli Air Force fired two missiles into an empty area east of Gaza City, no damage or injuries were reported.

Two residents were also wounded when the army bombarded an area believed to be used as a training ground for the Al Quds Brigades, the armed wing of the Islamic Jihad, west of Khan Younis in the southern part of the Gaza Strip. The two residents work in a gravel pit close to the bombarded area.

The Israeli Air Force also bombarded a tunnel in the border area between southern Gaza and Egypt, no injuries were reported.

The Israeli army bombarded late on Wednesday at night two areas in Gaza city and an area in the northern part of the Gaza Strip causing excessive damage and wounding five Palestinians.

Local sources reported that an Israeli F-16 fighter-jet fired a missile into an open area near the Cars Market in Al Zeitoun neighborhood, east of Gaza City.

The missiles caused damage to property in the area while medical sources reported no injuries.

Later on, the Israeli Air Force bombarded a blacksmith workshop in Jabal Al Rayyes area in northern Gaza; damage to the workshop and several surrounding homes was reported.

Adham Abu Salmiyya, spokesperson of the higher committee of medical services in northern Gaza, reported that five Palestinians, including two women, were mildly injured in the shelling and were moved to a local hospital.

On Tuesday morning, Israeli soldiers invaded a number of areas in northern Gaza and exchanged fire with resistance fighters.