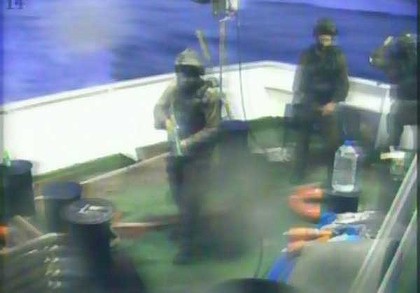 On Friday, the Turkish government released a summary of its investigation into the Israeli assault on an international humanitarian aid flotilla in international waters on May 31st, 2010 — an assault which left nine aid workers dead. The Turkish investigation found that Israeli troops used excessive, indiscriminate and disproportionate force when attacking the aid ships.The Turkish inquiry, which submitted its report to the United Nations committee in charge of investigating the attack, found that five of those killed were shot by Israeli commandoes at point-blank range. Two of the aid workers were killed by shots fired from the air as Israeli commandoes lowered themselves from helicopters onto the humanitarian aid ships.

According to the summary report, ‘Israeli forces carried out a well-planned and fully equipped attack, with the use of a special combat unit, kitted with frigates, helicopters, zodiacs, submarines, automatic weapons, laser-guided weapons, and modified paintball guns’.

The investigators found that one of the men killed in the attack, Cevdet Kiliclar, was targeted by laser-guided weapons while photographing on the deck of the Mavi Marmara aid ship. Another aid worker, 19-year old US citizen Furkan Dogan was shot in the leg, then, while lying injured on the deck, kicked by two soldiers, then shot execution-style at close range.

One of the members of the inquiry, Turkish Foreign Ministry official Mithat Rende, told reporters, ‘The force used was not justified, it was excessive’. He added that the United Nations should act on the findings of the investigation, and ask Israel to apologize and compensate the victims.