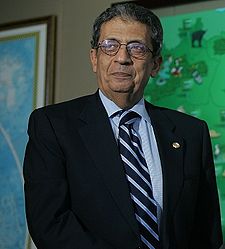 In a previous interview with CNN, Mousa said that he is ready to assume any post he is asked to fill, adding that his ideas represent most of the Egyptian people.

Mousa described the revolution that led to ousting the regime of Mubarak as a “white revolution”, and welcomed the decision of Mubarak to step down.

Mousa became the Secretary-General of the Arab League ten years ago, and also served as Egypt’s Foreign Minister.

After the Egyptian revolution took off, officials at the United Nations started discussing Mousa as the “best alternative” to Mubarak.

Although the White House made no comment on the possibility that Mousa might run for president, John Bolton, former US Ambassador to the UN said that Mousa is a better alternative than the Director General of the International Atomic Energy Agency (IAEA), Mohammad ElBaradei.