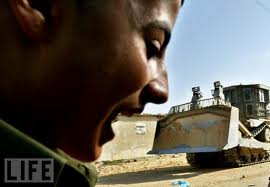 The Wadi Hilweh Information Center reports that Israeli bulldozers cleared a tract of Palestinian land in Sheikh Jarrah yesterday.Landowner Khalil Abu Taa’ has been fighting a lengthy legal battle for the land since 1978 and has since been issued several orders by the Israeli Magistrates Court prohibiting him from using the one dunum of land in question, which is used for planting fruit trees.

Abu Taa possessed both Turkish and Jordanian deeds to the land, yet he has found it impossible to convince authorities of his case.

“We have received several orders from the Israeli courts prohibiting my family and I from working the land,” he says. “This culminated in the demolition of a room that had stood on the land since 1940 and 50 olive, cypress, almond and apricot trees. A 9 meter-high wire fence demarcating the land from the Government House was also removed.”

The removed fence was built in 1995 as part of a Magistrates Court decision to enable the family to use the land. Then in 2008 they were prevented from accessing the area when the land was fenced with a new barbed wire barrier.

This one dunum is the one remaining part of what was originally 33 dunums belonging to several local Palestinian families, the rest of which has all been confiscated for government building construction.

Abu Taa’ has called on legal institutions to intervene to stop these illegal attacks on his land.