Tent Erected in Silwan to Commemorate Victim of Settler Violence 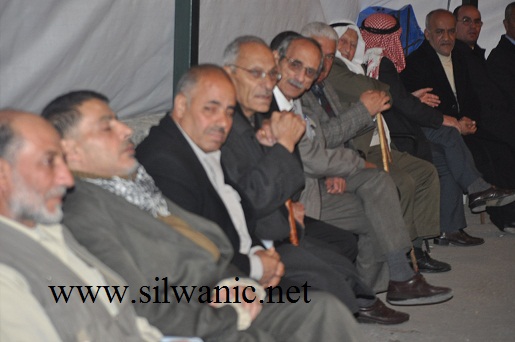 On Sunday, residents of Silwan in East Jerusalem erected a tent of mourning dedicated to local deceased victim of settler violence, Husam Hussein Rwidy.The ceremony was attended by a number of representatives of various popular committees and civil society institutions from Silwan, as well as dozens of Palestinian political figures from outside the village.

Speakers expressed their support for Rwidy’s family and praised their incredible steadfastness, illustrated by their determination to bury his body in the cemetery close to Al-Aqsa mosque, which is the closes one to Silwan.

Speakers also denounced the racist brutality that Rwidy fell victim to on February 11 and also applauded the strength and determination of Palestinians living in Jerusalem, despite living under sustained attack from both the Israeli state and extremist groups and individuals.

Rwidy was murdered on Feburary 11 on St George Street in West Jerusalem by a gang of right-wing extremist Israelis. He died as a result of multiple stab wounds inflicted by the attackers.

The incident is not the first of its kind, with many Palestinian youths subjected to verbal and physical harassment in West Jerusalem, many of them documented by the Wadi Hilweh Information Center.

The family of Rwidy has also been subjected to pressure and harassment by the Israeli authorities, who initially refused allow him to be burried in the Aab al-Rahma cemetery. Israeli authorities also attempted to impose arbitrary restrictions on his burial and the route and time of the funeral, as well as how many attendants were permitted. They also made it difficult for the family when they wanted to bring his body to the Al-Aqsa Mosque before burial.