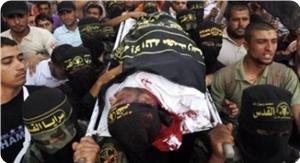 The al-Quds Brigades, the armed wing of the Islamic Jihad, reported that one of its fighters died of wounds suffered during clashes with Israeli forces invading Gaza City on Wednesday morning.The Brigades stated that the fighter, Adel Jundiyya, 25 years old, was seriously injured when the army bombarded an area east of Gaza City, and died of his wounds during evening hours, the Palestinian Information Center reported.

It added that fighters exchanged fire with undercover forces of the Israeli army during an invasion that followed the shelling, a total of ten were injured. Allegedly two mortars were launched at the Israeli tank, which responded by firing on the militants.

Also on Wednesday, eleven Palestinians were injured when the army bombarded Malka Junction, east of Gaza City; two of the wounded are in serious conditions.