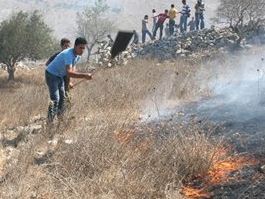 Fundamentalist Israeli settlers conducted, on Friday at dawn, several attacks against property and lands that belong to several residents of a number of villages near Nablus, in the northern part of the West Bank.Local sources reported that a number of armed settlers of the Yitzhar settlement, south of Nablus torched a bulldozer that belongs resident Ibrahim Eshtayya, from Burin village, south of Nablus.

The settlers also wrote anti-Arab and anti-Palestinian graffiti at the entrance of Jeet village, south west of Nablus, and also punctured the tires of a number of vehicles.

The recent attacked are part of several similar and repeated attacks carried out by settlers against the residents and their lands in different parts of the West Bank, especially in Nablus and Hebron.