Murdered Jerusalem Man Subjected To Racism Even In Death 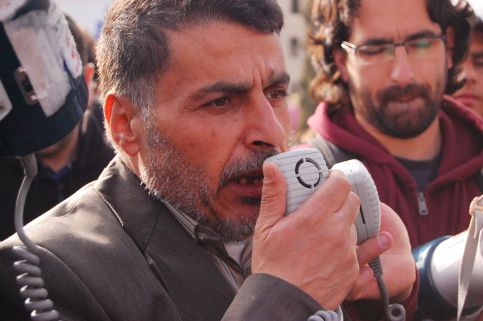 All Hussain Hassan Rwidy wanted was to bury his son.

‘They took me to see the investigator who worked on the case. He called me inside [his office], alone, and asked me, ‘Are you strong?” I said to him, ‘I want my son,” Rwidy told The Electronic Intifada.’He said directly to me, ‘Your son died …” Rwidy paused, then continued. ”Your son died, and there are two people arrested.”

Twenty-four-year-old Hussam Rwidy was killed in the early morning hours of Friday, 11 February, on Hillel Street in West Jerusalem as he and a friend, Murad Khader Joulani, were walking to their car to drive home from work.

According to the Rwidy family, who live in the East Jerusalem neighborhood of Kufr Akab, everything began when a group of extremist Israeli Jews heard Hussam and Murad speaking Arabic to each other, and shouted ‘Death to the Arabs.’

‘My son started to walk [away],’ said Hussam’s father, from a mourning tent set up to remember Hussam in the occupied East Jerusalem neighborhood of Silwan, where the family is originally from, last Saturday.

‘They came from behind with a knife and jumped on him. After they cut his throat, four more people came and started to beat them with punches and kicks,’ he explained.

While Hussam died of his injuries when he reached the hospital, Joulani survived the attack with a deep knife wound visible on the back of his neck. According to an account Joulani gave to the Wadi Hilweh Information Center, a resident-run information and media center in Silwan, Joulani managed to pull Rwidy to a nearby restaurant where he called for help.

‘None of the Israeli customers assisted the two men, except for one who handed Joulani a paper napkin to remove the blood from Rwidy’s face. Joulani was then himself able to call the police, who then commenced investigation into the incident,’ the Wadi Hilweh Information Center article states (‘The final moments of the martyred Husam Rwidy,’ 20 February 2011).

The Israeli police originally arrested two suspects for the crime, but placed a gag order on the details of the criminal case. The Israeli media, however, quickly presented the attack as a drunken brawl between the two groups, an account the Rwidy family vehemently denies.

‘If the government or police lie and say that [Hussam] started this, I will never believe that. He was handsome, a gentleman,’ Hussam’s uncle, Bassam Maswadi, told The Electronic Intifada.

The gag order on Rwidy’s case was lifted earlier this week, and the Israeli media reported that four Israeli teenagers — two from Jerusalem and two from illegal Israeli settlements in the occupied West Bank — were arrested for his murder. Israeli daily newspaper Haaretz reported that ‘police suspect that the stabbing had nationalistic motives and the prosecution decided to put them on trial for manslaughter’ (‘Four teens suspected of stabbing Arab youth to death in Jerusalem,’ 23 February 2011).

‘After praying in the mosque on Friday [11 February], I was on the bus and my wife called me to tell me [what happened]. I was shocked,’ Maswadi said. ‘I started crying, like he was my son.’

The Rwidy family’s turmoil didn’t end with Hussam’s death, however, as they were forced to wait five days before the Israeli authorities would release Hussam’s body for burial.

The family wanted to hold his funeral in a graveyard adjacent to the Haram al-Sharif, or Noble Sanctuary, which is known to Jews as the Temple Mount and is the third holiest site in Islam.

‘They said to me that Sunday at 11am, everything is okay and [I] can come and take [my] son. When I went on Sunday, they said to me the security situation didn’t allow that,’ Hussain Rwidy said.

The Israeli authorities argued that they had secret evidence proving that if Hussam’s funeral was to be held in the vicinity of the Temple Mount, a riot would break out, similar to what happened when an Israeli settler security guard shot and killed Silwan resident Samer Sarhan in September 2010.

Therefore, the Israeli police forced a set of rules upon the Rwidy family, which needed to be agreed upon before his body was released. Israel said only forty persons could be present at the burial, that it could only take place after 8pm and that the family couldn’t hold the ceremony near the al-Aqsa mosque.

‘But at 1pm on Sunday, the police called me and said that everything [in the agreement] is cancelled,’ Rwidy said. He explained that the Israeli authorities told the family that they would only be allowed to pick up Hussam’s body at the Qalandiya checkpoint — which separates East Jerusalem from the rest of the West Bank — and that he could only be buried in the West Bank, not Jerusalem.

This outrageous condition, Rwidy explained, forced the family to submit a petition to the Israeli high court to get Hussam’s body back. They finally reached an agreement, and at 12:30am on Wednesday, 16 February, were able to prepare Hussam for burial.

That night, Hussam’s body was taken to a mosque in Ras al-Amud, a neighborhood of East Jerusalem near Silwan, and was buried in a cemetery there.

Only twenty men and fifteen women were allowed to be present while the body was being prepared for burial, and no more than fifty men could be at the funeral ceremony itself. The family was not allowed to visit al-Aqsa, either, which is a customary practice for Jerusalem-area Muslim families.

Palestinian citizens of Israel and residents of East Jerusalem have been the target of increasingly discriminatory and hostile rhetoric in recent months on the part of Israeli politicians, religious leaders and members of settler-related organizations.

In Jerusalem, this inciting rhetoric has translated into more than a dozen separate incidents since the summer of 2010 in which Palestinians have been attacked, beaten or killed by groups of Jewish Israelis.

Last November, it was reported that groups of Israelis were stalking Independence Park in central West Jerusalem, looking for Palestinians to attack. The rising wave of violence received international attention when a middle-aged Chilean tourist was mistaken for a Palestinian and was sent to a hospital after he was jumped and beaten near the park (‘Fundamentalists Attack Chilean Tourist After ‘Suspecting’ He Is Arab,’ International Middle East Media Center, 8 November 2010).

In another incident reported in late December by the Wadi Hilweh Information Center, a 28-year-old resident of Jerusalem’s Old City was severely beaten in a bar on Jaffa Street in West Jerusalem after a group of Jewish youth shouted racist, anti-Arab remarks at him (‘Racist attacks on Palestinians,’ 23 December 2010).

‘These attacks in the last two years I would say are not just one person or two persons, [but] it’s actually quite organized. You can see an organization going on in especially the suburbs of Jerusalem, in the settlement suburbs like Pisgat Zeev, Givat Zeev,’ explained Yossi Bartal, a long-time Israeli activist and community organizer based in Jerusalem.

‘Young kids that come from these neighborhoods that are very much influenced by right-wing politicians, by rabbis, go to the city center and try to use violence and show their right-wing ideology by attacking Arabs or anyone else they don’t like,’ he said.

The Jerusalem Post reported in December 2010 that a group of nine Jewish Israeli youth from the Jerusalem area had been taken in for questioning on the suspicion that they were involved in a string of attacks on Palestinians in the city (‘Nine member J’lem gang arrested for attacks on Arabs,’ 21 December 2010).

‘The youths, most of whom are aged 14 to 19 and are residents of Jerusalem or the surrounding suburbs, are accused of gathering on Thursday nights, identifying Arabs and attacking them with stones, glass bottles and pepper spray,’ the article reports.

According to Bartal, while the Israeli police have made some arrests, they aren’t taking these racist attacks seriously enough and most importantly, have failed to define much of the violence as being racially-motivated.

‘The way the police tries to define these things as just normal fights is very political,’ Bartal said. ‘They are actually stating the obvious: that they don’t want to fight racism by not defining these attacks as racist attacks.’

The pressure on the Israeli police and government, therefore, needs to come from
Israeli society itself if individuals and groups are to be held accountable for their role in the wave of violence, Bartal said.

More than a hundred persons gathered in Silwan last Saturday to mourn the loss of Hussam Rwidy and condemn the vicious attack that ended his life.

‘People need to open their eyes and see what’s going on. All of us are human beings. We can live together. We need to respect each other,’ said Bassam Maswadi, Hussam’s uncle.

Maswadi explained that Hussam worked two jobs — as a Coca-Cola salesman during the day, and making deliveries from the Mahane Yehuda market in West Jerusalem at night — in an effort to save money and start a family. The eldest of three children, Hussam planned on getting engaged next summer.

‘Anyone who needed help, he would help. Lots of people respected him. He was just great. He was like one of my sons,’ Maswadi added.

According to Hani Baidoun, a Silwan resident and friend of the Rwidy family, the Israeli government and police and security forces play a large role in perpetrating the violence toward Palestinians in Jerusalem.

‘Previously we used to hear them saying that a good Arab is a dead one. Today, neither a live or dead Arab is good for Israel. They want to evacuate Jerusalem from Arabs as much and as quickly as possible. They are pushing them to think openly about leaving Jerusalem for the West Bank and even abroad,’ Baidoun said.

‘The Israeli policy and government encourages such beliefs and such acts against Arabs, Palestinian youth and the Jerusalemites in particular,’ he added.

‘[The Israeli authorities] have a responsibility,’ Maswadi said. ‘We will be afraid to go in the streets at night now. We live together. This is not a life.’

Originally from Montreal, Jillian Kestler-D’Amours is a reporter and documentary filmmaker based in occupied East Jerusalem. More of her work can be found at http://jilldamours.wordpress.com.