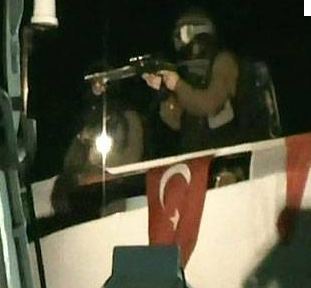 Turkey decided on Friday to expel the Israeli Ambassador in Istanbul after Israel refused to meet the Turkish demands to officially apologize and to compensate the families of the slain Turkish activist killed when Israeli attacked the Gaza-bound Turkish MV Marmara of the Freedom Flotilla ship last year. Turkey also demanded Israel to lift the siege imposed on nearly 2 million Palestinians in Gaza.It is worth mentioning that the Israeli Ambassador left Turkey several days ago after he finished his term in office.

Ankara further decided to downgrade its relations with Israel. Turkish Foreign Minister, Ahmet Davutoglu, stated in a news conference in Ankara that the relations between the two countries have be downgraded to a second level, Israeli daily Haaretz, reported.

The Turkish ambassador to Tel Aviv was recalled last year after Israeli attacked the MV Marmara. Turkey also suspended all of its military cooperation and joint training with the Israeli army. All Israeli flights were also banned from entering Turkish airspace.

Davutoglu stated that all Turkish personnel at the embassy above the send secretary will be heading back to Turkey by this coming Wednesday.

The Turkish decision was made only one day after the UN report on the attack was published. The report indicated that the Israeli army used excessive force during its attack against the Gaza-bound solidarity ship killing the nine Turkish activists, and wounding dozens.

Haaretz reported that Israel’s Ambassador, Gabby Levy, is currently in Israel and that, on Thursday, he had to cancel plans to head back to Turkey.

Although Israel said that it “accepts the findings of the UN report”, it insisted that it will not issue any apology for the deaths of the activists.

It is worth mentioning that despite denouncing the attack on the Turkish ship, the UN report yet concluded that the Israeli blockade on Gaza is “legal”, but slammed Israel for the unreasonable use of force against the ship.

On Friday evening, spokesperson of the Israeli Prime Ministers’ Office, Ofir Gendelman, stated that Israel recognizes the Palmer UN report, as long as its reservations that were submitted to the Palmer Committee are taken into consideration.

Gendelman added that the Palmer report affirms “the legality of the Gaza siege”, and also indicates that “there is no humanitarian crisis in Gaza”.

The Turkish embassy in Tel Aviv said that Ankara believes that it challenges certain findings of the Palmer report as it “did not serve stability and peace in the region”, Haaretz said.

The embassy also stated that relations between the two countries cannot be normalized again, unless Israel issues an official apology and pays compensation for the families of the victims.