Settlers Vandalize An Israeli Military Base, As A ‘price Tag’ Act 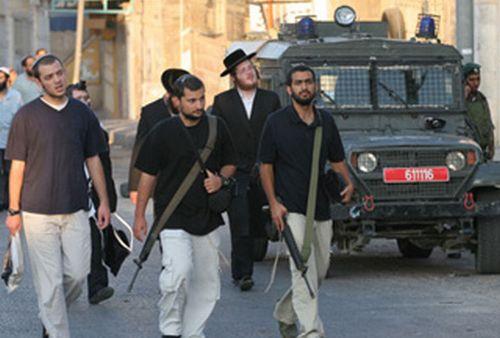 The Yesha Council of Settlements, the central body representing Israeli settlers in the West Bank, condemned the ‘price tag’ operation carried out by a group of Israeli settlers at an Israeli Military base on Wednesday.The council called on the government to crack down on what they called ‘marginal group’.

Israeli sources reported earlier Wednesday that unknown perpetrators infiltrated a base in the Binyamin region, managed to sneak their way into the mechanics workshop on site, where they slashed the tires and cut the cables of 13 military vehicles.

Haaretz said on its online edition, that this was the first ‘price tag’ act extremist settlers have implemented against the army since adopting their policy of seeking retribution to exact for any curb on Israeli settlements in the West Bank.

According to Haaretz, settlers sprayed the word “price tag” on the walls and painted graffiti related to the structures the military demolished in Migron illegal outpost near the West Bank city of Ramallah.

Since the destruction of these structures, settlers have carried out a number of assaults against Palestinians, including torching a mosque near Nablus and assaulting Palestinian pedlars near Hebron.