US efforts to void Palestinian-UN bid 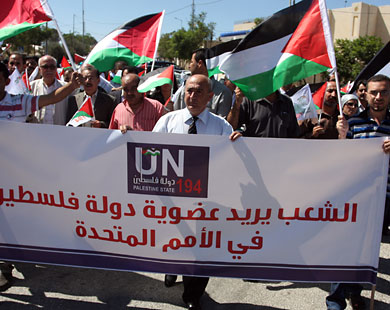 The spokeswoman confirmed that the US would make progress regarding the Palestinian-Israeli negotiations.

“The meeting held between the P.A President, Mahmoud Abbas, and the US envoy in the Middle East, David Hale and Dennis Ross, last Wednesday in Ramallah were constructive and aimed to convince Palestinians rescinding their bid at the UN,” Noland said.

Earlier this week, Washington waved its threat of veto against the Palestinian statehood recognition at the UN Security Council.

“The Palestinian delegate to the UN would unveil the way that Palestinians obtain full membership and recognition at UN upcoming Monday,” Riyad Mansour, Palestine’s envoy to the United Nations, told reporters.

Moreover, Mansour stated that the Palestinian leadership would decide regarding the mechanism to be followed to submit its bid to the UN during a meeting with the Arab states in Cairo upcoming Monday.

“130 states of the 193 UNSC members recognized and backed the Palestinian statehood so far. There are several other members would declare their support soon,” Mansour told Al-jazeera in a statement.

However, Palestinians are seeking to obtain UN recognition of an independent Palestinian statehood; the mechanism for the bid still veiled.

The bid, nevertheless, must gain approval of the UN Security Council and General Assembly together to guarantee a full membership or to be internationally recognized.

Earlier this week, China declared its support for the Palestinian bid at UN.