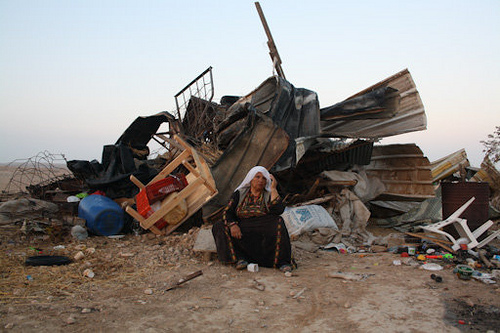 In a cabinet meeting, on Sunday, the Israeli ministers approved a plan based on the ‘Prawer Report’, which involves the forced removal of 30,000 Arab Bedouin villagers in southern Israel from their homes.The Bedouin people have lived in southern Israel for hundreds, if not thousands of years, but when Israel was created in 1948, the Israeli government chose not to recognize the Bedouin as residents, and have repeatedly destroyed their homes in the decades since.

After Sunday’s decision was announced, around 150 Bedouins gathered outside the office of Israeli Prime Minister Binyamin Netanyahu to protest the plan. Some have termed it ‘ethnic cleansing’, and a Bedouin representative told Israeli reporters with Ha’aretz newspaper that the displacement plan represented a ‘declaration of war’ by the Israeli government against the Bedouin people.

When the ‘Prawer Report’, commissioned by the Israeli government to come up with a ‘solution’ to end the ‘Bedouin problem’, was released in June, the Association for Civil Rights in Israel filed numerous objections to the report.

The report says that the ‘unrecognized’ Bedouin villages must meet a number of criteria in order to be ‘recognized’, including economic sustainability and contiguity – criteria which many Bedouin people say involve the forced urbanization of their rural culture.

According to the Association for Civil Rights in Israel, ‘If the same criteria were applied to the Jewish population, whole settlements – including community settlements, observatories, kibbutzim and moshavim – would be doomed”.