Multiple Arrests by Israeli Military Across the West Bank 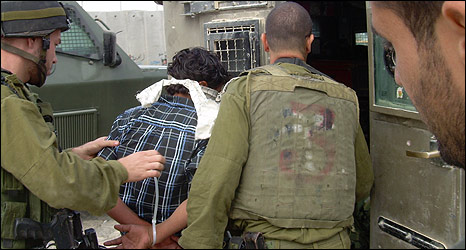 Several Palestinian residents have been arrested in raids in numerous locations across the West Bank on Thursday.The Palestine News Network are reporting the arrest of 21 year old Islam Khalf, from al-Shawawra near Bethlehem, and three young men from Nablus – Imad al-Tanbour, Munir Najeh al-Masri and Abdullah Dweikat.

The Ma’an News Agency are reporting the arrests in the districts of Jenin and Qalqilya. Bilia Farid Awad, from Siris, and Fawzi Sharqawi from az-Zababida, both in the Jenin district have been arrested and, in addition to Sharqawi’s arrest, his four sons were presented with orders to appear at local Israeli military bases for questioning.

Furthermore, the Wadi Hilweh Information Center, based in the Silwan neighborhood of East Jerusalem, have released information that secretary of Fatah Party in Silwan and local activist, Adnan Ghaith, has been summonsed for questioning by Israeli authorities just hours after his return to Silwan.

Ghaith was barred from his home neighborhood of Silwan by the Israeli military, using emergency laws originally enacted by the British during the British Mandate of Palestine, for eight months.

Another Silwan resident, 15 year old Ameer Qaraeen, again has been arrested as the State of Israel claims Qaraeen missed a scheduled court appearance. The Wadi Hilweh Information Center has stated that Qaraeen has been subjected to repeated harassment including arrests and interrogations.